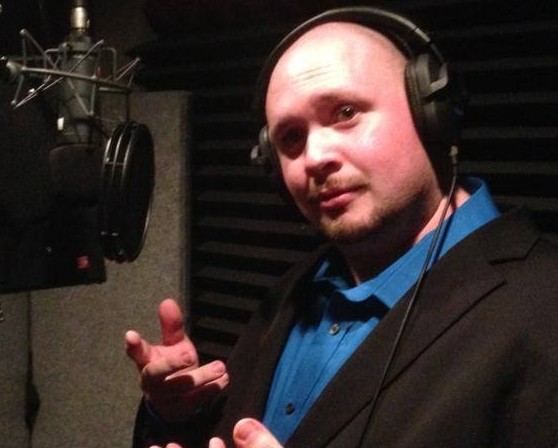 Chances are you know who Jon Bailey is, but just don’t realize it. Not only has Bailey been doing voice over and voice acting work in movie trailers, video games (most notably as the Council Spokesperson in the XCOM franchise), and animation for several years, he is well known as the “Epic Voice” of Honest Trailers on YouTube.

At MomoCon 2015, Bailey took time out of his day to sit with TAM and talk about Honest Trailers, his own YouTube channel, and his career in voice acting.

This is a two-part interview! To read part two, click here. How has MomoCon been for you?

So far it has been good! Nobody crazy that tried to get hair follicles to clone me or anything like that.

So, you seem to have a pretty sizable fan-base now. Has your popularity because of the Honest Trailers been a surprise to you?

YES! It really was. Honestly, I thought the job was just another YouTube request, because I had my own YouTube channel and people would contact me when they would find me and say “You’re really good with this… could you help me with that…” I usually, if I had the time would say “yeah, sure.” When Screen Junkies contacted me, I thought it was the same thing. To be honest, I didn’t even look at the views to see how popular they were, and they were already pretty popular back then. In the millions of views. To me that was pretty good. Now, the views are insane! I think the Frozen one has like 24 million plus. They get like three million a week and just continue to grow. It just continues to get bigger and bigger and bigger… now we have our own official San Diego Comic Con panel this year!

I always thought, if I did get on a Comic Con panel, which I’d always wanted to do, it would be on a voice actor panel. I’ve been doing this stuff for six years, and I’m already on a Comic Con panel. I mean, the size of the crowd in that Honest Trailers MomoCon panel that we just did shocked me. I thought, “It’s Sunday morning… it’s 11 a.m… people are hungover and were up all night…” but yet, they packed the room! It was freaking amazing!

When you do your work with the Honest Trailers team(s), do you have a contract with them?

As a voice over artist, are you a part of the Screen Actor’s Guild?

Do you need to be a part of guild in order to do what you do?

For YouTube? No, because it’s basically a collaboration. The way I kind of do it, because I improvise a bit, it’s kind of like helping write with the script. I have my YouTube channel, they have their channel, so they link to me in video descriptions, and they’ve annotated me before, so it helps grow my own channel on the side. So, it’s like a back and forth kind of thing. If it was an “official voice-over” job, they probably wouldn’t want to do it because it would be too expensive.

It’s weird with the multimedia stuff because they are still working on how to work out residuals and is it technically voice over work or is it on camera work? I don’t know all the legalities and all the issues of how that works. It’s not something I auditioned for because it was just like “oh, this guy seems to be cool, let’s work with him and make videos together.”

Now, for real trailers, those jobs go through the Screen Actor’s Guild. If you’re doing non-union trailers then A) you’re probably getting ripped off and B) someone is doing something they’re not supposed to be doing. The only downside to doing movie trailers, there are no residuals in that type of work, whereas in animation and even in most commercials, as long as it’s running you get paid some kind of residual. So, yeah, those are the kind of jobs you want to get, the kind that continue to pay. I’ve only got a handful of residual jobs. I did one for Jimmy Kimmel and every time someone decides to download that episode or anytime that episode re-airs over breaks, I get paid a little money. But, the longer it’s on the air, the smaller those checks will get. A lot of the biggest voice actors live off of the residuals if they’re not currently working.

There was a movie that came out a couple of years ago about trailer voice-over actors called In a World. What was your opinion of it? Was it an accurate representation of the business?

It was very, very close to the truth. I mean, obviously they put a lot of movie elements in it to make it a romantic comedy story instead of a straight up reflection of the business, but it’s absolutely true. There are very few women in promo work. You might hear women voice overs on Oxygen or Lifetime or some of the kid’s stuff like in the movie, but yeah it’s actually 100% true. It’s not fair at all. In any part of the business, there’s so much more work for men than for women.

One of the other voice actor MomoCon guests and I were talking about that last night. She said that for every 20 male roles, there’s like two or three for the women. It seems like the handful that are getting hired are from one little group, so the others, who aren’t a part of that group have to work three times as hard to book anything.

The cool thing about that movie is that I know a few of those people, and they actually are playing who they are in real life. Marc Graue is in a scene where there is a big party. He’s the guy with the glasses and a ponytail. He’s actually a voice actor and director and he works out of Marc Graue Studio in Los Angeles. The voice of CBS, Joe Cipriano was in that group, playing himself. Fred Melamed, the guy who plays the retiring voice actor, really is a voice actor in real life. They used a lot of voice actors for the film, which is cool I think.

In terms of vocal work, what has been the most difficult job that you have ever done?

Oh boy. When I worked on the very first XCOM game. There was a character called The Elder, the final boss at the end. His voice required two separate voices to record. I had to literally read all of his lines twice in two different voices. I had just left a convention in Dallas and my voice was in really bad shape.  All I had was that one Sunday to go from Dallas to Los Angeles to rest and then we recorded on Monday.

Click the PLAY button below to hear the rest of Bailey’s answer to this question:

Are there specific tricks or exercises that you do to maintain your voice health?

Click the PLAY button below to hear Bailey’s answer to this question:

To read part two of the TAM interview with Jon Bailey, click here.