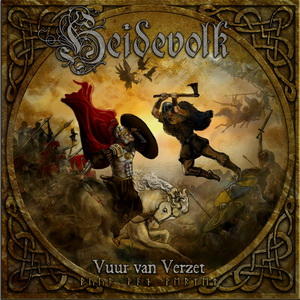 Dutch folk metal outfit Heidevolk unleash its sixth record, Vuur Van Verzet, to commence the new year. The opening track “Ontwaakt” is equal parts pummeling and melodic with a cutting midsection that concludes with a weeping violin. That same stringed instruments opens the following track “Wolf In My Heart.” This catchy track is one of two songs on the album with lyrics in English. There is powerful symbolism on this track as vocalists Lars Nachtbraecker and Jacco Buhnebeest compare the warrior to the wolf. A predator that hunts his prey in the dead of night. It is a fairly straightforward song and thus one of the more accessible songs on Verzet. “Yngwaz Zonen” begins with a simple tribal drum and the group singing. Although I do not understand the lyrics, it evokes a spirit of unity and triumph. One can envision a group of Frankish warriors seated at a campfire recalling past battles. “O, Britannia” is driven by a thrashing riff and upbeat drumming before breaking down in to a grooving midsection replete with chanting and circular guitar solo. Alas, “The Alliance” is the second track sung in English. It opens with stomping drums and staccato riffs intertwined with acoustic guitar. There are several rhythm changes in this song that takes the listener on a journey, but never loses them. The sweeping riff near the song’s end is relentless before acoustic guitars drown it out and peacefully conclude the track. “Tiwaz” is a galloping number named at the rune symbolizing the Norse god Tyr. Tyr is associated with law and heroic glory and this rollicking song would certainly bring a smile to his face. “Gungnir” is the spear of Odin and this percussion driven track is both exuberant and ambitious. The unpredictable riffs complement the brutal drumming and gives the track a sense of urgency in a chaotic battle. A strong track certain to become a fan favorite.

Vuur Van Verzet is a heavy metal lesson in Dutch history. While I am not a Dutch speaker, it caused me to look up several words to understand their meaning. Thus, it is educational for listeners. The Amon Amarth comparisons will certainly come up, if they have not already. However, the Heidevolk’s music differs from its Swedish peers in that there is greater emphasis on traditional music and acoustic guitars. The band successfully mingles soft classical passages with melodic death metal, allowing for a varied sonic texture. Heidevolk is not as heavy as Amon Amarth, but the band is heavy when it wants to be. The songwriting is stellar and the production is crisp, especially with the percussion.

Ultimately, Vuur Van Verzet is for fans of folk, viking and melodic death metal. There is little filler here and each song seamlessly flows from one to the next. Pick this up for a night of headbanging in battle.