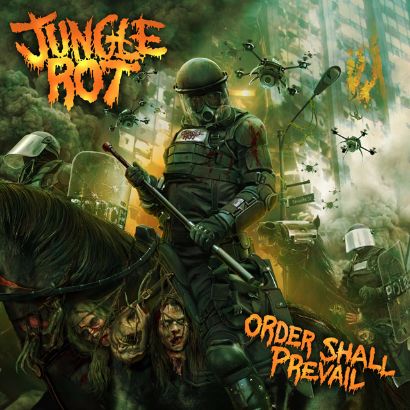 Jungle Rot march on the war trail with its eighth album Order Shall Prevail. The band’s previous album, Terror Regime, saw the group at its most technical and progressive. That is not a bad thing, however, the band’s signature groove was less prevalent, causing the album to drag in certain spots. However, on Order Shall Prevail, the old school brutal groove is back mixed along with some progressive elements, making it a solid mix of old and new. The opening thrasher “Doomsday” cuts through like a buzzsaw with high intensity drumming. The standout track “Paralyzed Prey” is the album’s initial single and encapsulates everything great about Jungle Rot. The brutal, laid back groove, sludgey riffs, and Dave Matrise’s barking vocals make this a top notch track. The legendary Max Cavalera of Soulfly and Cavalera Conspiracy makes a guest appearance on “Fight Where You Stand.” The mechanic riffs move along like a tank rolling over bodies while Max belt outs the chorus “No room for cowards/fight where you stand!” The song is an all out take-no-prisoners charge that will get bodies moving in the pit. The eerie riffing on “The Dread Pestilence” conveys the frightening foreshadowing of a widespread plague.

The production on this record is strong just like the band’s previous two releases on Victory Records. The album is not overproduced, and all four instruments are mixed well. The production is much like the band’s songs, simple and to the point. That may turn off some people that want a more “sophisticated” record, but it fits the band perfectly. Besides, this is old school death metal, it’s about the heaviness.

Order Shall Prevail is the band’s best record of the three it has released on Victory Records. It may be the band’s best album in its 20 year history. The record retains Jungle Rot’s signature sound while increasing the technicality of the band. The brutality is not watered down, nor is it too simplified. All is in order on this record and Jungle Rot certainly prevailed.

Check out the band’s website for news and tour dates: http://www.jungle-rot.com/