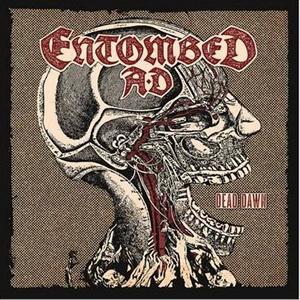 Entombed AD return with a lethal dose of death n’ roll on its sophomore effort, Dead Dawn. This record reminds me a lot of Entombed’s 2003 record, Inferno, both in terms of production and songwriting. The band mixes elements of thrash, death, doom and punk and it makes for a fun recipe. The initial single “Midas in Reverse” has a punkish grit to it. The track is fast paced with a smidgen of death metal. “Down to Mars to Ride” is straight hardcore swag. It is straightforward death n’ roll in attitude, guttural vocals and lo-gi guitar. The dirgey “As The World Fell” lumbers along with sorrowful guitar lines that evoke a deep sense of hopelessness. The band then speed things up on “Total Death” with its razor sharp riffing and L.G.’s somewhat deciperable vocals. This track does not relent for one second and the guitar solo blasts through like a laser. The foreboding “Hubris Falls” combines classical music and doom for a regal, but downbeat ride to Hell. Baroque guitar chords collide with grinding riffs and deranged screams.

The confidence and bravado exuded by the band makes this record so enjoyable. Entombed AD are not trying to prove anything to anyone, the guys just want to play heavy music. The band stumbled a bit on its 2014 debut, Back to the Front. However, any shadow of uncertainty or doubt is nonexistent on Dead Dawn. The songs are diverse and the band does not make the mistake of recycling riffs. Entombed’s longevity is largely attributed to the band’s ability to reinvent its sound. This has drawn criticism from some in the metal genre, but acclaim from others. The band has so much to draw from that the album does not suffer from monotony. Album closer “Not What It Seems” provides a hellish end to this album with its dreamy guitar phases and rolling drums.

In all, Dead Dawn is an improvement over Back to the Front as the guys have rediscovered their confidence. The album is heavier than its predecessor and more adventurous. Entombed was at its best when it plays outside the box and Entombed AD operates in much the same way. Fans of Entombed AD’s first album or latter Entombed records will enjoy this record. The Swedish Death Metal legends are finally back to the front.

For news and tour dates check out the band’s Facebook page: https://www.facebook.com/EntombedAD/