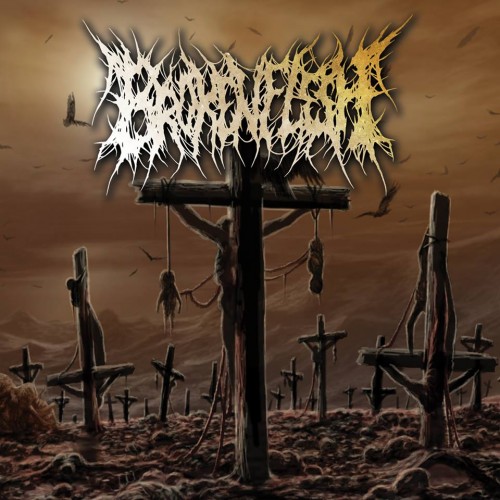 Christian metal often gets a bad reputation for being soft or fake. Well, one cannot say that about Oklahoma metal act Broken Flesh. The band’s self-titled third album is straight up guttural, tech-death metal with a groove. In fact, one would not even know Broken Flesh is Christian since the vocals are indecipherable. The music is also not fluffy or toned down in the slighest. The pulverizing “Blood Harvest” is rife with blast beats and jackhammer riffs and a whirlwind breakdown. “Consumed by Death” rips through the speakers like a thousand spears and does not relent. The song’s violent riffs bludgeon the listener and gives the impression that death is near. The band slows things down a notch on “Hell,” keeping a nice groove before unleashing chaos again.

The production is solid, and captures the monolithic song structures and lumbering guitar work. This is one of the heaviest records I have heard from a new metal act. The sound does not go overboard into “pardodyville,” which is a plus. The only detractor with Broken Flesh is at times the songs lack variety. The songs are complex and offer twists and turns, but there is a lack of diverse songwriting. Still, that is a minor issue and the musicianship slightly eclipses this problem. The album also does not drag and is 35 minutes in length, which is another high point.

Throw out any preconceptions you have about Christian metal. Well, at least when it comes to Broken Flesh. This band is a solid death metal act that can (and has) share the stage with any extreme metal act. Broken Flesh is a good American death metal album, which IS good at a time when extreme American music is in a low spot. Extreme metal fans should check out Broken Flesh and prepare to be consumed by brutality.

For more information on Broken Flesh, check out the band’s Facebook page: https://www.facebook.com/brokenflesh