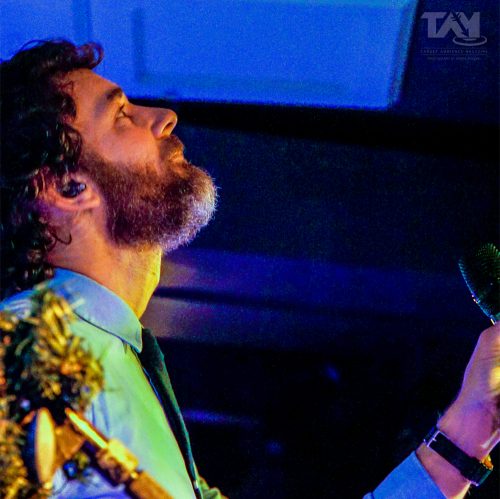 Carbon Leaf’s winter holiday shows at Rams Head On Stage in Annapolis, MD have been something of a tradition for my wife and I since well before we were married.  Though we had complications that prevented us from attending last year, we always make the attempt.  This was our third time seeing one of these concerts, of which there are several over the course of the weekend.  There’s the 21 plus Friday night show, followed by a Saturday matinee and concluding with a 21 plus evening concert, all of which sell out each and every time (usually in the first few hours).  While we normally opt for their final residency appearance, wouldn’t you know I didn’t buy tickets in time!  Instead we attended Friday night, which turned out to be a truly wonderful performance.

Opening up the whole weekend was Marie Miller, a remarkably talented singer-songwriter who, with just one album under her belt, has already accumulated quite a few accolades.  After a single album, her song, 6’2”, was featured on Dancing With The Stars, and she had the opportunity to perform her tune, “You’re Not Alone,” in front of 750,000 people, to include Pope Francis, at the Festival Of Families in 2015.  I suppose that was a good enough resume to have her open for Carbon Leaf that night.  But let’s say you were like me, and you didn’t know any of that prior to hearing this young woman play and sing.  Then, like me, you would truly be swept off your feet.  With a velvet voice she lifted us, and with her aggressive mandolin chop chords she had my heel bouncing off the floor.   Her set featured several cover songs, including Coldplay’s “Yellow,” the Goo Goo Dolls’ “Iris,” and in the spirit of the holidays, a unique rendition of “Silent Night,” which took on a novel texture with a new vocal melody.  Her obvious musical competence, coupled with her charming between song banter led to quite a few hearts being won over.  Mine included.

Like any great family get-together, time with the Carbon Leaf family during the holidays is filled with heartfelt moments and a bit of uncertainty.  Not long into their set we all raised our glasses to honor the passing of astronaut John Glenn.  On the other side of the spectrum, fast forward towards the end and you’d witness a waltz between vocalist Barry Privett and Gaelic Storm’s Patrick Murphy, with trepidatious moments where there was leaping and lifting of each other, sometimes which appeared more like a fireman’s carry than a dancing maneuver.  My wife and I were pretty sure someone was going to be seriously injured, which would have been icing on the cake for Privett, whose forehead had already received an after-hours stitch up by a local doctor after losing a battle with a door earlier in the evening.  But these were just some of those special in-between moments when we weren’t all being wooed by old and new tunes that warmed us to our cores.

Some of the highlights of the night, barring those stated above, were the explosive “Desperation Song,” the single-mic’d “Two Aging Truckers,” and the now traditional “Carter’s Christmas Beard” (an homage to Gravatt’s face-warmer) sung by bassist Jon Markel.  After over an hour and a half of music, the quintet closed out their set much to the disappointment of loyal fans.  But they stuck around afterwards to have a drink and share a laugh.  I, myself, had the opportunity to speak with the drummer subbing in for the regular percussionist, Jason Neal: Scott Devours, a supremely talented individual who normally plays with Roger Daltrey of The Who.  I also caught the ear of Carter for longer than I probably should have, discussing music and musicians at length, ranging from Paul Gilbert to Ricky Skaggs to Clutch.  It was a good evening indeed, and one that I hope you’ll all go out and find next time Carbon Leaf stops by your neck of the woods.  You deserve it.

For more photos of this evening, check out photographer Elmo Thamm’s album.