by Tillman Smoot
with no comment
Concert CoverageThe ATL

See more photos by Michael Bradley at the end of review.

At the beginning of 2016, Dream Theater released The Astonishing, a double CD coming in at over two hours in length. On Sunday, December 4, 2016, the band performed the album in its entirety to an enthralled crowd at the Atlanta Symphony Hall in Atlanta, Georgia.

Yes, you read that correctly; a progressive metal band performed at a symphony hall. While the combination of this particular music genre and venue may not make sense at first, with a little more insight into the concept for the tour, the alchemical mixture of metal and symphony hall makes perfect sense.

The Astonishing is the 13th studio album released by Dream Theater. It is a concept CD written by guitarist John Petrucci and keyboardist Jordan Rudess that brings something new to the rock-opera idea. The story of The Astonishing is broken into two acts, complete with a narrator and parts for several separate characters (all voiced by lead singer James LaBrie). In a time where music is largely downloaded and absorbed without any kind of interaction by the listener, The Astonishing is a work that should be enjoyed at least once while reading along with the original lyrics in front of you.

The goal of Dream Theater’s 2016 tour was to bring the theatrical story of The Astonishing to audiences in the format of a staged musical. While there were no actors on stage to sing the different parts, the band performed in front of and surrounded by several video screens displaying animations of the characters, scenes and settings as the story progressed. The screens served to help the audience visualize the story, but were never detailed enough to take the power of imagination entirely away from the audience. So, perhaps now you understand why the Atlanta Symphony Hall was picked for the show. It was a specific choice made to contribute to the night’s theme and two act structure (three if you include the encore). 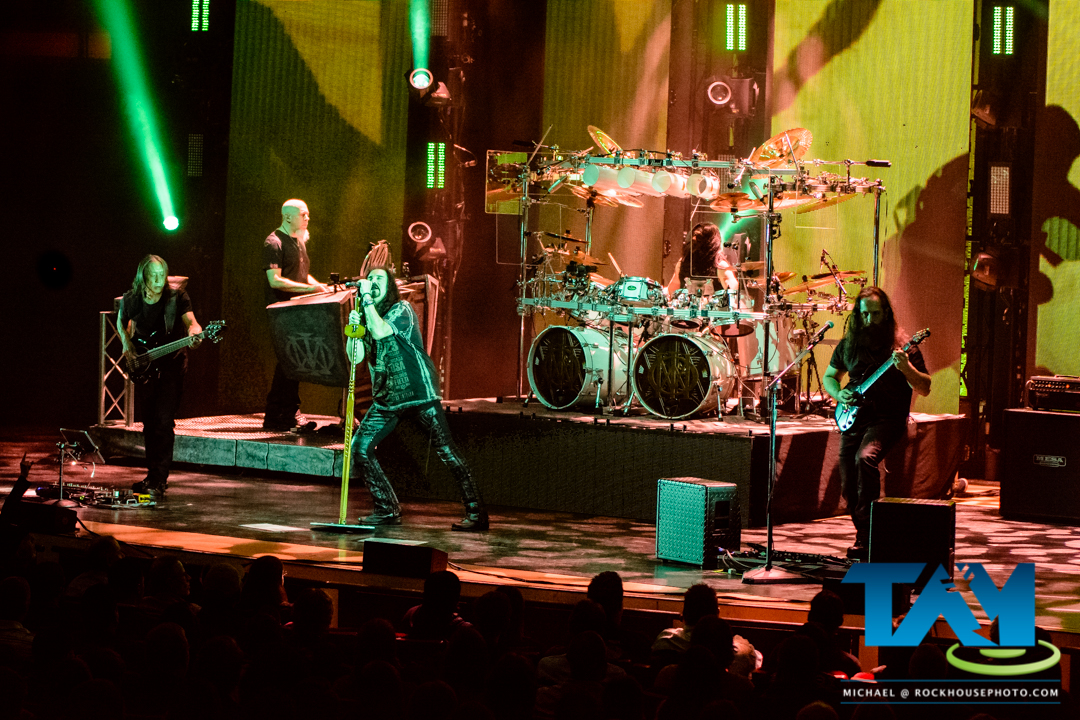 With The Astonishing, Dream Theater created an album featuring music as elaborate as the story and setting that was being presented. While Petrucci’s skill on the guitar is undeniable, he is only 1/5 of the reason that the band works as well as it does. Each member is a master at their chosen instrument, which clearly includes LaBrie’s vocal work. To be able to reproduce The Astonishing in its entirety every night must be a herculean task for any musician, but everyone in Dream Theater was clearly up to the challenge.

The Atlanta show was the second to last show of the tour, which ended on December 5 in Durham, NC. The band showed no signs of being tired or disinterested in the performance. The energy on stage and the musical performance felt as if it was all still a shiny new creation, still mint in the box, not a phoned in effort by a band the end of the tour. Even after the band had finished the full two plus hours of The Astonishing, they came back on stage for a three song encore which included “As I Am,” “The Spirit Carries On,” and “Pull Me Under.” If there was a flaw in the evening, it was that the mix was a bit too loud. If the sound had been just a bit lower, it would have been a perfect presentation.

While Dream Theater’s The Astonishing tour has come to an end, the band plans on going back on the road in 2017 in a more traditional tour style in support of the 25th anniversary of the album Images and Words.

More information on Dream Theater can be found on the band’s official website.