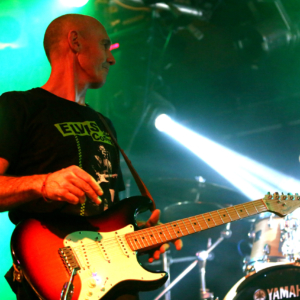 New Zealand singer-songwriter BRIAN BAKER today celebrates the release of his latest 5-track EP OPEN UP YOUR HEART, a collection of new and reimagined tunes, recorded at his Kaipara-based studio facility.

A new arrangement on a song he originally wrote back in 2018, ‘Open Up Your Heart’ is a cruisy, care-free, electro-dub ear-worm with an ageless and universal message which Baker says is simply an appeal to lift up our hearts and embrace love. As far as writing and producing the track, it was a true labor of love. “I really took an experimental path with this particular song. It had been recorded previously but I wasn’t happy with it. I took it apart and built it up again, new chords, new lyrics, a more interesting and challenging arrangement. Did I mention that I love singing those acapella vocals in the mid-section? It’s a thing…..”

The EP also includes another earlier song Baker had co-written with former Split Enz musical maestro Eddie Rayner when they had the band The Makers, the revitalized foot-stomping track ‘New Kind Of Blue’. With ‘Fool’, the big groove and guitar riff with its catchy chorus make this an instantly radio-friendly tune, followed by a dreamy instrumental Baker composed titled ‘Blue Water Meditation’, which showcases his guitar skills.

To round off the EP, Baker surprises even himself by including a slightly tongue-in-cheek cover version – a charged-up arrangement of the Tori Amos song ‘Cornflake Girl’. “We were doing a live TV show as The Makers in Sydney back in the early 1990s”, says Brian. “And the other musical guest on the show was Tori Amos doing a piano-vocal performance of ‘Cornflake Girl’. We were blown away by her immense talent and this particular song. I’ve always wanted to do my own rock guitar treatment on it, and here it is.”

The EP is currently streaming across all digital streaming platforms. Listen to ‘Open Up Your Heart’ on Spotify now, or watch on YouTube below.

The consummate journeyman musician is also a laid-back bohemian life-styler, living off-the-grid on his permaculture farm in the picturesque heart of the Kaipara. It’s a busy combination, as Baker balances life between running the farm and all that entails, using his considerable musical talents to record and produce artists in his production studio, ‘The Bakery’. “Frank (old blue eyes Sinatra) is our boss goose/gander and he wrangles me each morning before I can get to coffee, with loud demands to feed him and the girls! Only when they’re satisfied can I head up to the studio and start my guitar practice. I feel very fortunate to be able to live life in this beautiful place and make music with the wonderfully talented artists here in Northland. True joy.”

A naturally gifted musician, Baker can lay claim to a catalog of songs sure to warm the musical soul of any audience member. Now, with the release of Open Up Your Heart, Baker is keen to change gears and make a return to performing live in support of it. He’s created a fantastic live show highlighting his uplifting vocals and amazing guitar skills, so keep a lookout for his tour dates and make sure you check out this talented guitarist/singer-songwriter.

Brian is launching the EP with a gig at The Ledge in Whangarei near where he lives on the North Island of NZ. Brian is also appearing at the Bay Of Islands Jazz and Blues Festival in August.

You can hear the entire EP on Spotify now.

Brian Baker is a singer/songwriter/producer with a passion for the environment, a theme evident in his songs, music, and videos. He plays guitar, bass, piano, keyboards, drums, and percussion, sings, and relishes his production duties, on his own songs and other artists’ works.

Brian is passionate about songwriting and is a student and big fan of Pat Pattison. (A professor at Berklee College of Music, teaching lyric writing and poetry. Songwriting instructor to John Mayer and Gillian Welch among others…) After moving to Australia from New Zealand in 1980, Brian performed with many Australian bands, securing a Sony recording deal with “The Ones”. Around this time he scored his first song placement on the second UnCanny X-Men album, (Australian rock act) with the song “Colour Your Answer Blue”. After writing and recording the top 20 single “Heart” with The Ones (released on Sony) he went on to co-write the score for the movie “Rikki and Pete” with Eddie Rayner from Split Enz/Crowded House. Eddie and Brian continued to work together as “The Makers”, releasing 2 CDs through Warner’s East West label, including the hit single “Big Picture”. Together with drummer Michael Barker, they toured Australia and New Zealand with the B52’s and appeared on TV shows like MTV, Countdown, Hey Hey It’s Saturday, Tonight Live, and The Midday Show. Eddie and Brian still work together from time to time, with Eddie contributing mixing tips and critique on his releases, plus various bits of keyboards on Brian’s other work.  They performed together at the Waiheke Island International Jazz Festival in 2012 to delighted crowds and recently released an album of outtakes and live recordings from The Makers.

“So there I am, standing up on stage in front of 25,000 people in Brisbane, Australia, playing with Eddie freakin Rayner, my childhood hero from the amazing Split Enz! Suddenly, power to Eddie’s keyboards drops out and he is limited to plonking out some bass lines on his backup synth. Our drummer – (the incredible) Michael Barker looks over at me and yells out – “take some solos Brian, until Eddie’s rig comes back on line!” So OK, step up – on with the show but I get told later – “That’s when the show came alive, people love your guitar playing…” Up until then, I’d always seen the guitar as more of a tool to get the song out there but with Eddie’s patient coaching and Michael’s encouragement I began to see it as a possibility to contribute more. This EP marks a stage in that journey, where long hours of practice and obsession with the great exponents of the art of guitar, (from Django to Jimi and SRV special mention to Jeff Beck), see the guitar being my increasingly preferred form of expression.”

In 2003 Brian signed with Fable Music/The Image Label to produce library music which continues to be used worldwide. He’s written and recorded radio and TV jingles, short films, and documentary scores. He has performed at countless shows and is writing and recording songs and music at the highest level of his profession. Brian is proud to be currently signed to Origin Music Publishing, which works with him to develop the music and songs he is frequently releasing and promote it worldwide.