by Dan Carroll
with no comment
Event AnnouncementsEvent CoverageThe ATL

The sequel to 2012’s Wrath of Con blends comedy with raw emotion to recast the story of convention goers as a tale of generational shift and succeeds on every level.

Dad’s Garage Theater Company, arguably Atlanta’s leader in comedy theatrics, has changed a bit since 2012. So has the convention scene in Atlanta.  The original 2012 Wrath of Con represented a world where “The Con,” a fictional analog to Dragon Con, was a place for outsiders to find common ground and escape the world. “The Con” of Wrath of Con: Into Dorkness is a place where those who have been attending for decades are confronted by the changing younger demographic. The younger characters are there for immersive gaming, the Marvel Cinematic Universe, and Anime; while the older characters are there to recapture memories of The Greatest American Hero and Deep Space 9. This generational clash is a theme through the play and offers the best laughs and the most touching moments.

This is a play for adults, by adults.  The language is rough, the situations can be sexual. It is clearly intended, as most shows at Dad’s, for those old enough to vote.

Writing on the play was begun by John Carr, Ed Morgan, and Z Gillispie in early January. The three produced a tight and hilarious script. The locale is a convention, but the story is universal enough that a theater goer would not need to see the original production or even be a convention veteran to appreciate the play.  It draws specifically on events and convention situations that were not addressed in the first play, makes subtle changes to the characters that are returning to address the passing of years, and introduces new characters organically into the situations.

After the show I heard one of the actors credit Dan Triandiflou’s direction for bringing out his character’s pathos without stopping the comedy.  And, from the audience we saw the effect of solid directing all night.  Each character is given a chance to bring out a purpose in their action, and an authenticity in their performance that never hits buffoonery, except in the character of Eric, where the buffoonery is the message.

The cast includes two actors returning from the summer production of the 2012 play: Taylor Roy as the aging Hank and Ronnie Johnson-Lopez as the unstoppable party-animal Eric.  Hank’s neice, who is attending The Con for the first time, is played by Hannah Morris.  A new African-American family is introduced with Avery Sharp as father Tim, an eternal member who had been coming longer than Hank, and Anthony Nash as his son, who wishes to go by his online name of “Switch-Knight.”  Rounding out the cast are Justin “4th ” Geer, and Karen Cassady playing mulitple characters.

Before discussing the action of the show, a special note must be made about Dad’s longtime performer Karen Cassady. Playing multiple roles she excelled as the Sipowicz-like character who works for the hotel while pursuing a secret cabal who controls the convention.  She had the audience in raucous laughter with each of her characters. If any complaint could be made about the show, it is this, her other main character, April, was not fully developed and ended up seeming like a trophy or “MacGuffin.” But, the real praise is for how easily she switched between characters.

To the left of the stage, the audience’s left, not stage left, was a monitor that displayed everything from the opening Star Wars-based scroll to various scene change notes, to fake commercials in the style of  Dragon Con’s DCTV and finally, to the closing credits.  The credits are important, remember them.

After the Star Wars scroll tells everyone to watch the play, the cast came out for a song we can assume was called “It’s the Con, Say what?” with each of the leads singing a few versus and with a hilarious line about what is most important at a con for an adult: “disposible income.”  We then are re-aquainted with Hank and introduced to his niece Sara.  Hank wants to show Sara “his” convention, while Sara wants to create new memories. This starts the struggle between them, and is a pre-cursor to Hank’s eventual decline into despair that the things he loves most about the convention are fading memories of favorite shows and experiences, which are also becoming fading memories. Sara is also here to meet a gaming-chat crush. 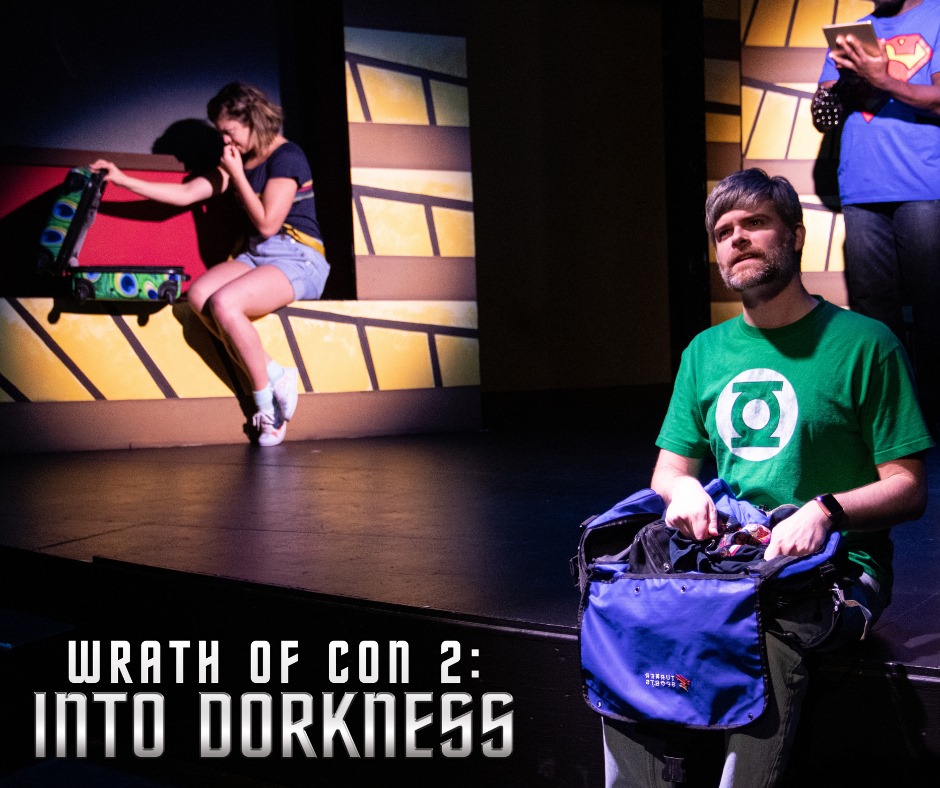 Tim and Switch reveal their own generational struggle.  For Tim the convention was a place of inclusion and a place of friendship and extended family. He wishes to bring his son to the convention to give it to him as a legacy, and to give his son the chance to find his own way in the con. But, Switch is here for gaming and not Battlestar Galactica.  Switch is a hardcore gamer who struggles with discomfort  in the real world. He is also here to meet his gaming-crush who, to no one’s surprise, is Sara.

Then there is Eric. Eric was introduced in the original Wrath of Con as clueless and wasted.  Eric is reintroduced as wasted and clueless, but this time he carries a secret.

To find out how each of the characters resolves their burning questions, one must attend the play.  This is a review not a spoiler. But, all actors bring their own vision to the characters and bring out the laughs and the feelings in the audience from the opening song to the curtain call.

But, there are some set pieces that bear calling out:

There is a brilliant longer segment where Switch is stuck in an elevator due to his choice to “go up to go down” while Sara is moving towards him through a sky bridge traffic jam.  The entire scene is done in the motif of Ken Burn’s Civil War. All of the dialogue is done via texts such as, “My dearest Switch, I long to find respite in your arms again.”  (Note: that might be the wrong verb, but that certainly captures the feel.)

And finally, remember when closing credits were mentioned?  This is where they fit into the review. This is a play with a post-credit scene. The post-credit scene was one of the funniest things I have ever seen on stage.  It was a sendup of the MCU, the Matrix, Kill Bill Part I, and so many other action movies carefully choreographed by Kevin Stilwell. There is nothing more that I can say that would not be a spoiler except that Eric’s secret is revealed.