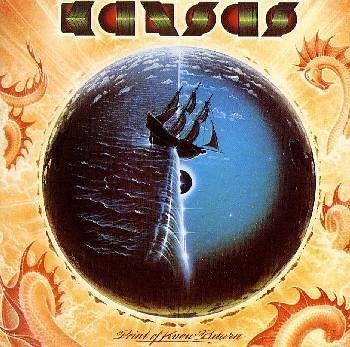 The legendary American midwestern prog-rockers Kansas will be making their return to Atlanta on September 28 at the Cobb Energy Performing Arts Center as part of their year-long celebration of the 40th anniversary of their Point of Know Return album, which was released on October 11, 1977. Upon its release, the album got off to a slow start, with the first single — the title track — peaking at #28 on the Billboard Singles Chart. It was the second single, “Dust in the Wind”, that kickstarted the album into high gear. The album also sports one of the most iconic covers of all time, a beautiful painting by Peter Lloyd evoking maps and beliefs from ages past. After a few struggling albums, Kansas finally hit the big time with their fourth album, Leftoverture, fueled by the massive hit “Carry On Wayward Son”, and Point continued and solidified their long-sought success. The band would strike gold with other hits as well, like “Hold On,” “Play the Game Tonight,” “Fight Fire With Fire,” and others. But they created some phenomenal music that never got any coverage on radio. Here’s a list of some of Kansas’ best deep tracks that show a much greater musical and lyrical depth than the singles do.

“Death of Mother Nature Suite” – Kansas (1974)
Kansas’ first album was a bold statement, a declaration of unique musical vision: a mix of Americana heartland with the power and majesty of the British progressives like Yes and Genesis. The album’s closing track, an 8-minute impassioned dirge with lead vocals by violinist and man-mountain Robby Steinhardt, laments our treatment of the Earth. Written by arguably Kansas’ greatest scribe — guitarist/keyboardist Kerry Livgren — the frenzied ending builds in tempo to the explosive climax.

“Song for America” – Song for America (1975)
Okay, this 10-minute song is technically not a deep track. It was released (in a greatly-shortened edit) as the only single from Kansas’ second album. Even though the single didn’t chart, the song is usually included in greatest hit-type of collections anyway, and I consider it sort of an honorary deep track. It’s sort of the band’s first declaration of what they’re about, musically, lyrically and ideologically. “Song for America” depicts the pristine landscape on a virgin continent and the damage done to it by colonizers: “Ravage, plunder, see no wonder / rape and kill and tear asunder / Chop the forest, plow it under.” Introduced by a full 3-minute overture that introduces the musical themes of the piece, this Livgren composition also features one of the band’s most complex instrument breaks.

“Mysteries and Mayhem” – Masque (1975)
Their third album further accentuates the dichotomy in Kansas’ sound between the straight-ahead rock of frontman Steve Walsh and the progressive-leaning proclivities of Livgren. When they combined their songwriting talents, though, the results were often incendiary. Case in point: “Mysteries and Mayhem.” Always spiritual, Livgren moved closer and closer to Christianity and near the end of the 70s had converted fully, a move which caused an increasing amount of tension between him and Walsh. “Mysteries” seems to be a vision that Livgren had of the demonic fate awaiting him if he didn’t get his life straight: “I heard my name being summoned as I looked around to see / a hooded judge and jury / there was no mercy there for me.”

“Miracles Out of Nowhere” – Leftoverture (1976)
Propelled by the FM strength of “Carry On Wayward Son,”  Leftoverture became Kansas’ breakthrough into the rock mainstream. Packed with great tunes, it’s hard to settle on one highlight. However, “Miracles Out of Nowhere,” having become a concert favorite with audiences over the decades as evidenced by this clip from 2002, definitely rises to the top. It’s sort of the antithesis of “Mysteries and Mayhem” in its positivism. The instrumental break is as close to a Bach fugue as rock ‘n’ roll ever comes, with each instrument playing its own melodic line independently of but still interconnected with the others.

“Hopelessly Human” – Point of Know Return (1977)
Point is arguably Kansas’ greatest album with no weak songs in the bunch. Aside from the hits, there are plenty of deep tracks that could be featured here — “Paradox” (probably Kansas’ best concert opener), “The Closet Chronicles”, “Lightning’s Hand”, the frantic and spindly instrumental “The Spider” — but the album closer, “Hopelessly Human,” is one of Livgren’s best compositions ever, both musically and lyrically. “It’s a strange aberration, this brainstorm of youth / Though it’s lost in translation from fancy to truth / It’s hopelessly human, both inside and out / A joyous occasion, there’s no reason to doubt.”

“Loner” – Audio Visions (1980)
Kansas closed out the 70s with a bit of misfire: an album called Monolith which was actually pretty good, but it failed to catch fire. It’s only single, “People of the South Wind,” floundered and the album suffered as a result. It was also the first album that featured no Kerry Livgren/Steve Walsh co-writes; the increased tension between them drove them to write separately. As the band entered the 80s, their sound was streamlined — shorter songs, less flowery arrangements — one major exception being Livgren’s “No One Together.” “Loner,” a great little rock tune written and sung by Walsh, is a highlight. Walsh left at the end of this tour due to the worsening situation between him and Livgren.

“Chasing Shadows” – Vinyl Confessions (1982)
Exit Steve Walsh, enter John Elafante. John auditioned to be Kansas’ singer and they loved his voice; the fact that he’s an excellent songwriter and keyboardist as well made him a shoe-in. His first album with the band, Vinyl Confessions, proved to be a success, with “Play the Game Tonight” become their third highest-charting single ever. Contributing half the material on Vinyl Confessions, one of the strongest songs on the album was Elfante’s “Chasing Shadows.” A song generally about the uncertainty of life, the first verse served as his introduction to the Kansas fanbase: “Some of you may know me and many of you won’t / I am just a player in the band / Some of you will listen and some of you will hear / Some of you may laugh at me and some of you will cheer / ‘Cause all of us, we are an audience / Looking for evidence, to help it all make sense.”

“Silhouettes in Disguise” – Power (1986)
The band’s fortunes didn’t last, unfortunately. Robby Steinhardt left after Vinyl Confessions, and after one more album with Elefante, Drastic Measures, Kansas broke up. A couple of years later, however, Steve Walsh reentered the picture and put together a new lineup that featured the return of drummer Phil Ehart and guitarist Rich Williams along with two new members. The reformed band scored a moderate hit with the excellent mid-tempo ballad “All I Want.” Nearly all the material was co-written by Walsh and new guitarist Steve Morse, formerly of the Dixie Dregs. Walsh sounds reenergized, and the album opens with one of his finest Kansas songs, “Silhouettes in Disguise.”

“Byzantium” – Somewhere to Elsewhere (2000)
Kansas recorded three more albums over the 13 years after Power to varying degrees of success. In 1999, the original 70s lineup reformed, along with bassist Billy Greer from Walsh’s lineup. Livgren brought with him an entire album’s worth of material, reclaiming Kansas’ earlier proggy sound. Highlights include “Icarus II” (a sequel to a song originally from Masque), the 9-minute “Myriad,” and this beautiful little history lesson steeped in the mysticism of ages past.

“The Voyage of Eight Eighteen” – The Prelude Implicit (2016)
Kansas’ first studio album in sixteen years delivers a sound reminiscent of the early 70s with this mini-epic (which lasts, not coincidentally, 8 minutes and 18 seconds). Written by current guitarist Zak Rizvi, current lead singer Ronnie Platt, and longtime drummer Phil Ehart (one of only two original members still active with the band), “Voyage” harkens back to Kansas classics like “The Pinnacle,” “Hopelessly Human,” “The Closet Chronicles” and others while capturing a lyrical message that you’d swear came from Kerry Livgren’s pen.

Kansas plays the Cobb Energy Performing Arts Center in Atlanta on Friday, September 28. Visit the band’s website to learn more and to get upcoming tour dates.