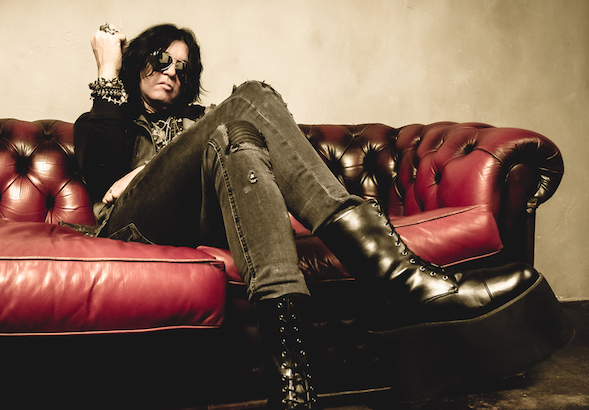 Keifer has been writing, singing, and performing since he was a kid. His unique style of vocals and bluesy guitar sounds made Cinderella unique among the over-saturated “Glam/Hair Metal” market of the time. The quality of his songs have cemented Cinderella’s place in music history and have resulted in a die-hard fanbase that continues to listen to Cinderella thirty years later. These days, you can find Tom Keifer performing all around the country with his eponymously named band, which includes his wife Savannah. A Tom Keifer show includes performances of classic Cinderella songs as well as cuts from his own solo album The Way Life Goes, which was just re-released last month.

The deluxe version of The Way Life Goes contains two new tracks as well two brand new studio tracks recorded in Nashville by three-time Grammy® Award-winner Vance Powell with Keifer and his bandmates (#keiferband: Tony Higbee, Billy Mercer, Paul Simmons, Paul Taylor, Savannah Keifer, and Kendra Chantelle). The Way Life Goes also contains the long-awaited studio recording of The Beatles’ “With A Little Help From My Friends,” which Keifer performs at all of his concerts, plus a powerful new take on the Cinderella classic “Nobody’s Fool,” newly recorded as a duet with Lzzy Hale of Halestorm.

Last week, Keifer checked in with TAM and talked for a while about how he writes, the evolution of the music industry, recording technology, touring, and performing live.

With the amount of time that you’ve been in the music industry, you’ve seen a lot of changes. What kind of effect has time had on writing, recording, and performing your music live?

Certainly, times have changed and it’s a learning curve each step of the way. Other than the obvious technical changes in actual recording equipment and going from analog tape to what we now have with Pro Tools… I’m sure there’s more coming. So those are all really cool technological changes. They allow producers and engineers to do things a lot quicker than they used to be able to do them. But the big learning curve and what’s really changed for the whole music world is the way people consume music.

So it’s social media, which I was never really a part of until The Way Life Goes was released. The label set up all of my social media and pretty much said, “Here’s the keys, go entertain the crowds.” That’s been a learning curve and now the deluxe edition of The Way Life Goes is going into streaming networks so I am being asked to kind of manage an artist Spotify page which we’re working on. So that’s a new thing for me… learning about streaming.

Every day is something new to learn, but on the flip side of that coin is touring is pretty much the same. You get on a bus with your band and you have shows booked and you play ’em and people come out and they sing all of the songs and you have a good time. So that aspect hasn’t changed really much at all. That feels the same. The creation of music and how to get it out there with the technology has changed all of that.

When you’re on the road, do you find yourself using these new devices or applications to record ideas that you might have at the time?

The writing process for me has always been: you gather these ideas of songs, which are usually lyrics sometimes with a melody that are floating around in your head. They pop into your head at like any given moment. Those are the inspirations I think that lead to the best songs as opposed to sitting down and trying to force an inspiration.

So I’ve always rarely, rarely used like a tape recorder or a voice memo or anything. I prefer to let those ideas float around in my head and the ones that stay there and keep playing and won’t go away you think, “okay well this is probably a good idea.” So it’s almost like natural sifting process.

When I’m on the road or just out and about with my wife, if something like that pops into my head, it’s just like, “okay there it is. Great, we’ll see if that one stays there.” If the gray matter hard drive can remember it, then maybe it’s worth writing down the road, and that’s how I’ve always done it.

I never write songs around technology. I know some people sit down with a drum machine and they get all kinds of stuff going on. To me, it’s always been about lyrics and melodies first. And then once you have that, then you get into the studio with a band or a drum machine or whatever sounds you’re hearing and then you create a production around it. But it starts with a song. You know, to me that’s usually just an acoustic guitar or a piano. Sometimes no instrument and a notepad and a pen.

Cinderella’s first album, Night Songs, and the second, Long Cold Winter, seem to show a fairly distinctive evolution of style into a blues-based rock sound.  Was that something decided by the label and producers, or was it more organic than that?

I’ll start by saying I think the main differences perceived from record to record are more production than writing. Production and instrumentation. The writing style on Night Songs, Long Cold Winter, and Heartbreak Station all comes from the American roots kinda stuff.

All of the melodies on Night Songs were blues-based melodies vocally and guitar-wise. And the lyrics are about real, everyday things. Even the title track, “Night Songs” has “working this job ain’t paying the bills, sick and tired rat race, taking my thrills…” The songs are about life and that’s what blues is about. So, the style of writing our songs, to me, is consistent with all the records.

But, the production changed on the records. The first record was very slick, kind of flavor of the day, that ’80s processed sound. The snare drums that sound like a shotgun being fired, that kind of stuff. That wasn’t forced on us, it was just, that’s what producers did. And it was the first record we ever made and it sounded better than anything we’d done on our own, so we were like, “Yeah, this is cool.”

But no, nothing was ever forced on us. When you’re in a certain decade, and you can see it with any decade or eras of music, the producers and engineers gravitate towards a sound or certain effects or things that are going on that are just the stamp of the day. I think a lot of artists are subject to that on their first records ’cause they’re inexperienced. And then you organically grow more into what maybe you grew up on, or what your roots are. Then you learn how to bring that out more in the studio. So, like I said, the first record’s writing was based on blues and roots music really in terms of lyrics and melodies, but it was just produced very basically. Two guitars, bass drums, just straight ahead.

We started experimenting with bringing in other colors on Long Cold Winter and making the mix a little drier and that kind of thing. We brought in acoustic instruments, the National Steel Guitar, and a little bit of piano. But the songs are really coming from the same place. You know it’s that life, falling in love, falling out of love, heartbreak, overcoming adversity. It’s all about real life and real emotions and I’m thinking that when you listen to them now with different ears, you’ll see that there’s a common thread melodically and lyrically throughout all the records. Right up to the solo record, too.

How has your stage setup changed from back in the 80’s to now?

Well, I still bring all the old vintage Marshalls and stuff that I’ve always used. I carry about… I don’t know, maybe eight or nine guitars on the road with me, and Tony, our guitar player, he’s got quite a boatload of guitars over there, too. It’s a rock band, right? We bring our drum kit. We bring our backline, which is all cool old tube amps and Marshalls and stuff, and a bunch of guitars because there’s a lot of different tones and guitar tunings and stuff, not only with the Cinderella material but with my solo stuff, too.

Tony and I are both changing guitars constantly to kinda re-create those colors that are on the record. So yeah, I mean, the stage set-up is just pretty much what I’ve always done with Cinderella and with my solo band. We carry that with us, and then most of the gigs we’re playing have got top-notch production, lights, and sound that you just play on. We carry all of our own sound people and crew and all, so they know how we want it to sound. We go into different situations every night. Everything from the theater to a club to a big festival, to a fair, and our crew makes it happen.

Do you use in-ear monitors now?

No, I didn’t like ’em. We still use wedges and old-school monitors.

I tried in-ears one time quite a few years ago. I was still touring with Cinderella at the time, and everyone kept telling me “Oh, you gotta try these, you gotta try these.” And I went and got the molds and bought a pair and put ’em in one night, and I went out and played about four songs, and I felt like I was in a silent movie. It was really weird. About four or five songs in, I just ripped them out and when I pulled them out, it was like… “Woah!” Just the whole ambiance of the amphitheater, the crowd, the stage, and the PA blasting back at you off the roof and in that moment I thought to myself, “Anyone who likes these has forgotten what that sounds like.”

I’d never put ’em back in. I just felt out of touch… And I know that you dial in audience mics and all, but microphone’s don’t hear the atmosphere that the way your ears do. Your ears are the best microphone on the planet, so I just like hearing the real thing.