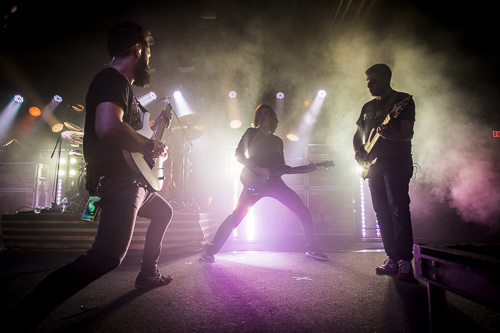 The night of November 14 was filled with positive vibes at the Masquerade following the shooting that occurred on Sunday, November 12. Being the first night the Masquerade opened for shows since the incident, security was tighter than usual with extra personnel and mandatory pat downs for all patrons. However, the show for D.C. bands Periphery and Animals As Leaders in Heaven had a huge turnout. The line for entry to the show snaked around Kenny’s Alley in Underground Atlanta making a Tuesday feel like a Friday night show. It really shows the strength that music has to bring people together following a tragedy.

Opening for Periphery and Animals As Leaders on their tour, Car Bomb took to the stage to kick off the night. Hailing from Long Island, New York, Car Bomb has a power rock feel but with heavy metal tendencies. The syncopated, offset beats of their drummer paired well with the shredding of their bassist and guitar and the vicious vocals of their lead vocalist. This band is a great opener and can really energize a crowd.

As one of the two anticipated headliners for the night, Animals As Leaders took to the stage. As the lights went dark and they struck their first note, the crowd got put into a trance-like state. Their two guitarists/bassists Tosin Abasi and Javier Reyes opened the set with their classic dual eight string guitars while their drummer Matt Garstka kept them in check with super precise rhythms. Since the band just plays instrumental music, the audience focused in on the technical skill put into the show. However, this did subtract from the overall showmanship of their performance as each band member seemed frozen in their own spotlight. The expertise by each musician in the band overshadows their siloed performances that seem to be more or less molded together. To put this in bluntly, they need to play off each other more and make their performance more of a live show rather than a recording session. Granted, a lot of attendees were more interested in seeing these masters of metal play their hearts out as the crowd sang along to the instrumental only music, but the show was missing that little bit of pizzazz to mark it as a great live show. Killer music but lacking showmanship.

To close out the night, Grammy-nominated Periphery took over the stage with their polished performance. At the start of their set, the band had a solid intro with dark undertones to set the tone for their show. As the anticipation broke with their first chord, the crowd went nuts, almost like the crowd was getting teased to mosh by Animals As Leaders and Periphery released that tension. Their music has a destructive vibe to it compared to the constructive vibe put on by Animals As Leaders, which gave their set even more punch. Like building a sandcastle just to have the pleasure to knock it down. Within the first few songs, the sea of attendees turned into a storm of crowd surfers and overall thrashing. The energy that Periphery brought onstage pervaded to all ears listening as the onslaught of metal music kept parading on. Each song told a story with dynamic twists and turns orchestrated by the various artists in Periphery, like story telling around a fire mixed in with metal. Overall, Periphery is a well-rounded band that kills it live.

To check out the Periphery and Animals As Leaders with guest Car Bomb on their Convergence Tour, check out the dates here. After November 17, Car Bomb was replaced by Astronoid as the opening act on the tour.