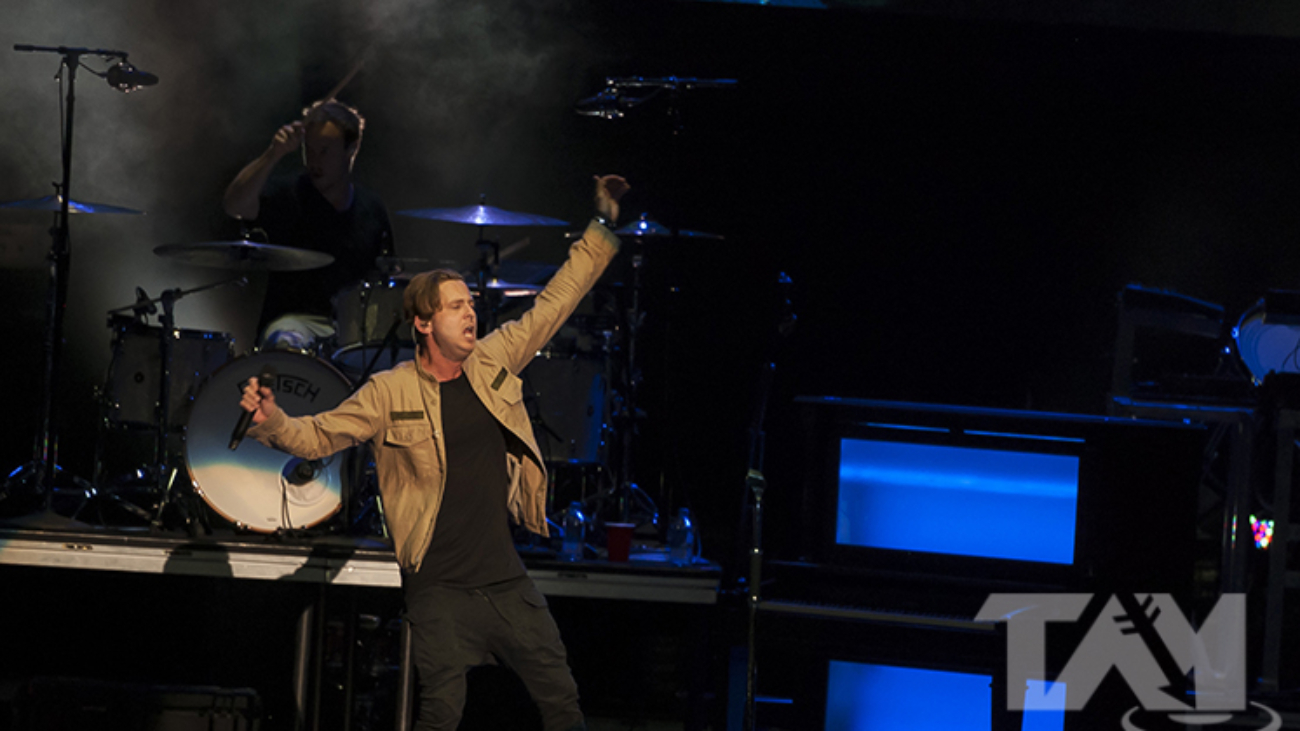 Atlanta’s Q100 hosted the Moonshine Grind October 27 at Verizon Wireless Ampitheatre, featuring co-headliners OneRepublic and Flo Rida. Despite the autumn date, the weather was that of a typical Georgia summer night, warm and breezy and perfect for an outdoor concert. Fans who arrived early enjoyed sets from openers Marc E Bassy, Tinashe and Nick Fradiani, before OneRepublic hit the stage.

Foot-stomping “Love Runs Out,” from 2011’s critically acclaimed Native, started things off right, and mega hits “Secrets,” and “Good Life” kept the vibe going. OneRepublic released latest album Oh My My in early October, with singles “Wherever I Go” and “Kids” getting steady radio play in the last few months. “Kids” was a highlight of the set, showcasing front man Ryan Tedder’s impressive (and frankly, underrated) vocal range against the unique, upbeat music of the song. The best performance of the night, however, was “Let’s Hurt Tonight,” the first track on the new album, which Tedder dedicated to anyone who has ever been in love. The song was a slow build until the chorus, with Tedder’s stunning vocals soaring through the stadium and all but quieting the crowd. A drum-heavy “If I Lose Myself” finished the set, then it was on to Flo Rida.

The rapper burst onto the stage with hit “Good Feeling,” backed by a talented co-vocalist and dancers. The energy was infectious and it didn’t slow down as “Right Round” kept the crowd dancing. At one point during the song, Flo appeared to walk off stage, only to come back with a fistful of dollar bills, which he then threw into the audience. As if that wasn’t enough to keep the crowd pumped, the back-up dancers then popped bottles of champagne, drenching the fans up front. The fun continued with Flo Rida’s breakthrough hit “Low,” with fans singing along to every word. Flo’s set also included current single “Zillionaire” and “My House.”

Nonpoint’s ninth record, The Poison Red, is a mix of old and new. The band’s signature heavy groove is abound, but the band does a bit of experimentation on this record. The choppy riffing on “Foaming At The Mouth” recalls early Helmet and totally contrasts with Elias insouciant rapping throughout the song. The band blends heavy crunch with a laidback groove making for a strong song. Things pick up on “Bottled Up Killer Bees” with its scratchy riffs that sound like bees crashing in a bottle. The shredding guitar lead on “Bottled” is a shining example of Nonpoint’s underrated musicianship. These guys can play more than the typical nu-metal riff and are not afraid to prove that. “Standing In The Flesh” is another heavy hitter. The stomping drumming drives this song forward while the riffs churn like whirlpool. This is another hit for the band and will certainly be a fan favorite on the band’s tours. The band makes a defiant statement on “Radio Chorus” as the group wants to to do what it wants without judgement and the constant pressure of conforming. “El Diablo” is another track sure to be another staple at Nonpoint shows. The band’s Latin influence takes center stage and is strengthened with a memorable chorus.

The key word on The Poison Red is diversity. The band does not play it safe and stretches its wings a bit on this record. No, Nonpoint does not deviate to much from its sound, but it switches things up enough to keep the listener’s ears perked. This is good as the band does not fall back on conventions and it also solidifies Nonpoint’s status as a band that makes music on its own terms. Not too many bands can boast of staying together for 20 years, but Nonpoint can.

In the end, Nonpoint can chalk up another victory. The Poison Red fits along just fine with the band’s discography. It is heavy, soft, angry, uplifting and introspective. Fans of the band should pick it up as should anyone that want an introduction to Nonpoint’s music.

For news and tour dates, check out the band’s website: http://nonpoint.com/