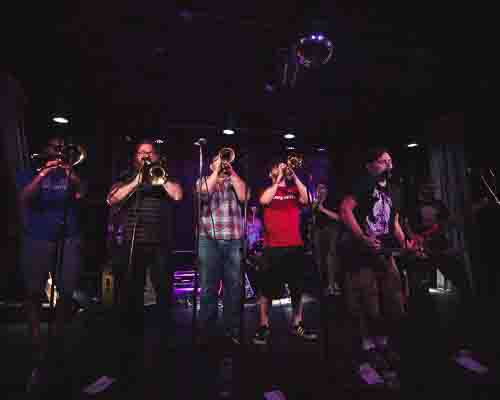 On August 17th Smith’s Olde Bar was bustling with the usual bar flies and concert goers that were partaking in their decompression from a stressful work week. Small hurdles of people crowded the stoop, getting their nicotine and breath of fresh air between shots and sets. Friends gathered around tables of libations, trading conversations of their weekly plights. Patrons were already queueing up to enter Smith’s iconic Music Room before the doors were even open for the night. And there was just cause for this pile up of music enthusiasts. Slated to play that night were Georgia’s own Wrong Way, a seasoned tribute band to Sublime,  and The Taj Motel Trio, a ska band slated to play at this year’s DragonCon.

After attendees got lubed up on drinks and conversation, the curtains in the Music Room drew back to reveal the first act of the night, The Taj Motel Trio. A band hailing from Habersham County, these guys are comprised of the standard trio of a vocalist and guitarist, bassist, and drummer but with the addition of two trumpets, two trombones, and a baritone sax. These guys boast the largest brass section I have even seen in a ska band. And if you didn’t notice, The Taj Motel Trio is not a trio, as their name comes from an inside joke with roots in the band’s hometown. However, names and jokes aside, these guys are the real deal when it comes to performing. Although they are stacked on the brass side, The Taj Motel Trio played a balanced set between all their musicians, with each member of the band given a chance at the spotlight.  Their songs had strong brass intros with harmonies that were sweet on the ears followed by wicked guitar melodies paired with an aligned drum and bass beat. On top of the technical expertise of the band to create a full sound, they show their nerdy side with what they sing about, including video games and Star Wars, with one of their songs literally called “Vader”. Overall, The Taj Motel Trio has the charisma and energy that embodies the spirit of ska music. I give a heavy stamp of approval and look forward to their debut at this year’s Dragon Con.

To continue the night, Atlanta’s own Wrong Way took to the stage with a cool vibe that holds true to their inspiration for their music, Sublime. A classic three piece act, with their lead guitarist on vocals, the band instantly stole the spotlight from the moment the curtains were drawn back, revealing a packed house. This being Wrong Way’s first show in Atlanta in a good while, as the band is constantly touring the southeast, the crowd in attendance really was a testament to the talent behind the band. Each musician had distinct melodies you could pick out in each of their songs that came together in a dovetail of pure delight to the ears. Their drummer has a timeshare in the pocket that he checked into from the first song of the night. He both held the set down and played around with complex melodies to give his drumming more character, something only seen with true masters of the kit. Wrong Way’s bassist kept it real with his impeccable taste in rhythmic beats that rock the soul. His groove could not be derailed by anything other than the occasional sip of a beer to keep his playing loose. The band’s front man guitarist, the last piece of this puzzle that forms a picture of true talent, killed it with his showmanship not to mention his talent on vocals or on guitar. He truly does Sublime’s original front man Brad Nowell justice allowing him to rest easy knowing Wrong Way does his music right. The band played through a full set that consisted of fan favorites of Sublime such as “Santeria” and “Smoke Two Joints” that got the entire venue up in a sing-a-long and even an acoustic break in the middle where their front man got intimate with the audience. Each song had the crowd up in a dance party even with some flow art involved. It was a truly uplifting vibe all around, which is a mark of true connection between a band and it’s audience. Finishing out the night with “Caress Me Down” there was only a room of smiles remaining with the occasional cheering from a patron for more. Wrong Way is definitely a band not to miss if you are looking to get your fix on some good music.

Smith’s Music Room once again hosted some of the best musicians and music fans of today’s scene. As this was my first time visiting this magical venue, I look forward to the next show I catch here, and the next 20 or more after that.