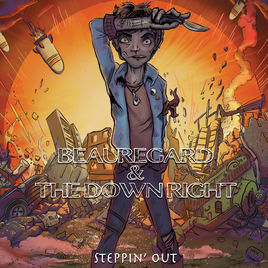 CD Review: “Steppin’ Out” by Beauregard and the Downright

This summer, Beauregard and the Downright released their album Steppin’ Out, a ten track masterpiece that embodies the obscure balance between grit and grace. If you are not familiar with these guys, Beauregard and the Downright is a refreshing blend of folk and reggae with truly soulful southern undertones. These music craftsmen put their heart and soul into each of their performances and did no less for their first album. Steppin’ Out starts out with it’s cover art, as all albums do, but in this case the art houses its known capacity of a thousand words. The front of the album shows a young, tattered survivor shielding his vision away from a post-apocalyptic scene of exploding missiles wiping away any remains of civilization. But that’s just one perspective, which never yields the full picture. On the back of the album, we can see what has captured the lone survivor’s gaze, a scene of tranquility that escaped the self-destruction of mankind, a scene where peace has prevailed and the wonderment of nature roams free. The artwork foreshadows what is found within the tracks of the album, which is a brief, blissful escape from the crazy, chaotic life we all struggle with at the snail’s pace that is the ticking away of time.

Steppin Out starts off strong with the track “Death & Destruction”, a well composed reggae tango where the lead switches between an extremely catchy horn chorus and mellow vocals that capture the chiaroscuro of humanity with each passing verse. Following this solid start, there is a drastic shift in tone with the second track called “Falling in Love”, As done with their album art, Beauregard and the Downright shows that there is more than one perspective on life. From here, the album goes into some very soulful jams that keep it real with some more sick horn melodies and groovy yet gritty guitar rhythms that pair perfectly with the truth found in each songs’ lyrics. Holding down the middle of the album is the ballad “Atlanta Anthem”, a true look into the depths of Atlanta with the unexpected yet delightful strummings of a ukulele. The band even gives some shoutouts to some of the city’s hotspots such as the Old Fourth Ward and local venues that the band frequents, such as the iconic 529 in East Atlanta Village. However, these shoutouts aren’t just an homage to our wonderful city but help spin the tale that is Atlanta, a city of hustlers and players where sorrows are lost in the bottom of glasses and bliss is found within a night out on the town. More bumping tunes follow in the album, with each song full of new surprises to the ears, really showing the dedication that Beauregard and the Downright put into their first big impression in the music scene. There is even a skit thrown in about the ordinary struggles of ordering some good pizza. To close out Steppin’ Out, the band did a cover of “I Wanna Be Like You”, as best known from the movie The Jungle Book, with all of this track being a live studio session with portions that are stark tributes to the aforementioned movie. These guys can definitely say they went out swinging on this album.

Check out Steppin’ Out for yourself to see what all this hype is about. I really am looking forward to seeing, rather hearing, how Beauregard and the Downright tops their sophomore release.