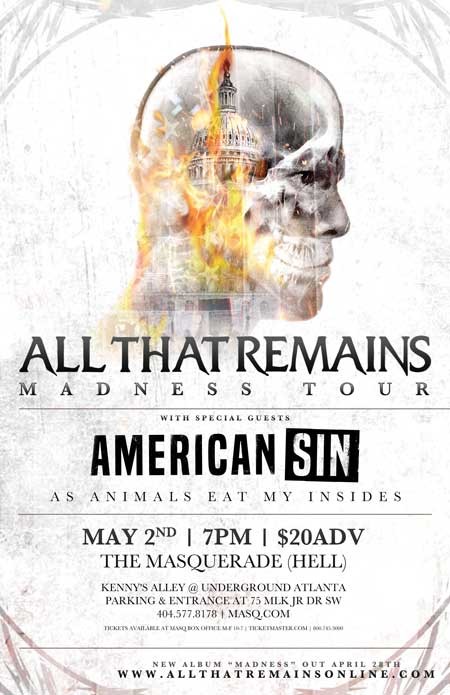 Live Review: All That Remains Madness Tour at Masquerade with American Sin and As Animals Eat My Insides

The night of May 2 filled Hell at Atlanta’s Masquerade with metal heads. All That Remains graced the city with their presence while on their “Madness” tour and were joined by American Sin and As Animals Eat My Insides. From when the doors opened, Hell filled up with rockers ready for a killer show that made a Tuesday feel like a Friday. The crowd seemed to be grasping onto whatever patience they had left waiting for metal to rule the night. They wanted a show and were not disappointed with what followed.

To kick off the night, As Animals Eat My Insides took the stage. As a local band from Atlanta, the band was in familiar territory playing at the Masquerade. Two of their members have even served in the ranks of the Masquerade staff. From the first chord the crowd was head banging and starting circle pits, not something you see too often in an opening act. The entirety of the Masquerade seemed to tune into the jams being pumped out by As Animals Eat My Insides. The interplay between the rhythm licks by Matt Simone and Philip Brooks and bass beat by Alex Bond for their song “Cutting the Cord” was clean and truly displayed the technical skill in the band’s songwriting. Their song “Juggernauts” brought out the gritty deep vocals of lead vocalist Jeremy Bond that paired very well with the heart pounding drum beat by Derrick Stephen. Overall, As Animals Eat My Insides shined with their solid stage presence yet nostalgic garage band vibe. Not an act to miss as an opener or as the main course for the night.

Gallery – As Animals Eat My Insides

As the middle act of the night, American Sin took the stage to continue with the night of metal and mayhem. The band started with a soft opening but quickly shifted the crowd into full throttle. Although a different take on metal from their former band name Come the Dawn, American Sin still meshes well together and holds its mettle as a cohesive metal band. The chops on lead vocalist John Bobinger were crisp amongst the shredding done by guitarists Samuel Morelock and Marcus Barber and bassist Jake Wire. The band’s sound had a balance between smooth and savage with clean switches between them that added a punch of flavor to their performance. Both “Empty” and “So Far Down” got the crowd hyped as these tracks are the backbone of the newly reformed band. On their last song, American Sin switched up their performance by having Marcus take the lead vocals which got the crowd pumped up for the headliner of the night.

As soon as All That Remains took the stage as the headliner for the evening, the crowd went nuts. Instantly all of the Masquerade pointed their attention to the slick sounds of the must-see metal band. Lead vocalist Philip Labonte brought insane energy to the stage that riled the crowd into a frenzy of metal heads. He has spent nearly 20 years as the original front man for All That Remains, alongside the only other original member guitarist Oli Herbert, and it really shows in his stage presence as Phil lead his motley crew of Oli and Mike Martin on guitars, Aaron Patrick on bass, and Jason Costa on drums. A few songs into the set, Phil gave an introduction for his band before diving into their single “Stand Up” that had the entire crowd singing along. All That Remains followed this up with their single “The Air That I Breathe” that helped put them on the map. Oli’s guitar solo just crushed it. His classic stylings of hair flips and mad melodic riffs are a sight to see. The rest of their set was welcomed by the crowd with cheers and raised beers. All That Remains proved they still know how to shred and rock an audience, even after lineup changes and almost two decades of music. They put on one hell of a show.

Galley – All That Remains

All three bands killed it at the Masquerade. To see where All That Remains are on their “Madness” tour, check it out at http://loudwire.com/all-that-remains-spring-2017-u-s-tour/.