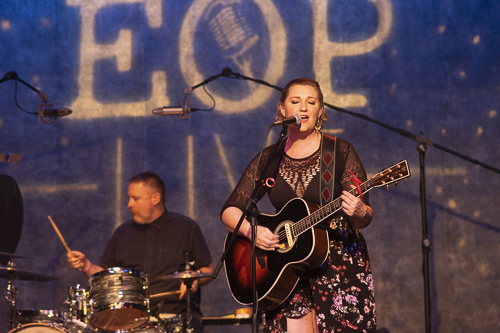 As the new year has now arrived, a whole new slew of shows awaits as the months peel back day by day. To kick off 2019 for Red Clay Music Foundry in Duluth, Juliana Finch and Erik Stucky graced us with a night of lovely tunes. Being the first Friday night of the new year, the show really set the standard of talent expected at the Foundry. The show was hosted by the one and only Eddie Owen who is the man behind the live music at the Foundry. As the venue is relatively new in the Atlanta scene, it is a place that is here for the long run and personally has a special place in my heart as Duluth is my hometown. Granted, Red Clay Music Foundry and most of current downtown Duluth were only ideas on paper when I was in high school, but my pride for my roots outweighs the changes that have occurred. I will say I hold some jealousy for the facilities at the Foundry, including practice rooms and a cozy green room, that would have been stellar for my high school orchestra days.

Getting back to the show, Erik Stucky was the opener of the evening. Hailing from Nashville but originally from Colorado, Stucky brought a lot of his life experience alive in his music that spans from sappy love songs to upbeat island tunes. He played a solo act on an acoustic guitar accompanied by his soulful vocals that paired perfectly, giving credence to why Stucky had played shows across multiple states in his tour. He made his set more of a conversation with the audience both in the storytelling of his craft and in bantering with the patrons. I fell in love with his song “If The Storm Never Ends” off his recent album Stray Clouds. The song was riddled with soul and heartwarming lyrics to boot about being there for a loved one even if the storm drags on into oblivion. As this was the first time Stucky played in Georgia, I’m looking forward to his next venture south from Nashville to see what new music this cool cat has cooked up.

As the headliner for the evening, Juliana Finch took to the stage with a bassist and drummer backing her up. Both of these musicians have regularly played with Finch, as made more obvious by listening to their set than by watching them walk on stage together. The group was very tight in their performance with each musician’s endless hours of blood, sweat, and tears giving a well deserved return on his or her investment. I really appreciate the bassist as he not only played the classic electric bass found in most bands around the city but also a double bass, which is the bass found in orchestras for those not musically inclined. Being an orchestra kid myself, I have much respect for anyone that can bring an element of an orchestra into a band setting. The drummer also deserves a shout out as he kept a steady beat for each song, adding in some of his tenured pizzazz here and there. From hearing him work his kit, I could tell there were many gigs behind those sticks.

And lest we forget the main attraction of the headliner, and the namesake of it, the one and only Juliana Finch. Finch got her start in the Atlanta scene doing the typical cover band and solo gig track and since moved to North Carolina where she lives now. She has a spunky, soulful voice with a touch of attitude that makes her stand out as an artist. Additionally, her songwriting shares the same vibe as her lyrics cover a wide range of topics, from modern-day drama to old Celtic lore. These three musicians really understand how to capture a moment through the mechanism of live music.