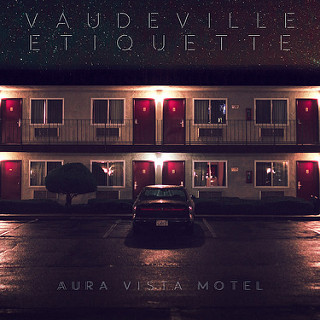 Seattle-based band, Vaudeville Etiquette follows up their 2014 debut album, Debutants & Dealers with the release of their sophomore album, Aura Vista Motel, which was released on May 6.  And believe me, I’ve listen to this album dozen upon dozen times and there is not one track on the album that disappoints. The entire collaboration is a brilliant follow up and to an already stunning debut that they made back in 2014. I can only imagine where Vaudeville Etiquette will go from here.  The 11-track album is engaging as it takes us on a beautiful journey into the land of psych-folk that blends beautifully with bluegrass roots with seamless harmonies, and the chemistry between Bradley Laina and Tayler Lynn is palpable and utterly transfixing to listen to.

Aura Vista Motel starts of strong and bold, like a really great cup of coffee and really kicks you into gear with “Crosseyed Crazy.” The steel guitar plays a significant part in the creation of this album, giving it the foundation from which the whole album uses as the building blocks for a masterful creation.

With poignant lyrics like, “Will I ever get it right?”  from the song “Aura Vista,” is truly reflective in nature by showing us the deep and painful, yet beautiful nature of a “shipwrecked soul.” “Damn Lovely” starts out with a raw sensuality that slowly builds into a blistering fire, leaving the listener to feel as if you’re unspooling from the inside out. I will say that “Bridges” has a Springsteen vibe to it that is just fun to listen to as a stand-alone song.

“Room 417” truly isn’t a song, but more a transition from the beginning of a relationship that brings us to the “Tipping Point,” which is filled with fiery passion. It’s bold, demanding with so much hurt and pain, along with all the chemistry that fuels all those opposing emotions is laid out raw right before the listener to consumer wholeheartedly with “we can get along, if we just don’t talk.” I think anyone who has ever been in a relationship, can understand and completely get those feels of when they reach the tipping point in their own relationship and all you want is for the other person to be quiet in order to get along.

When listening to “Set it on Fire,” I had this odd sense of feeling dismal mixed with a vision of an old carnival ride that encases the underlying tone of the song for me, it’s like you can feel the end in the distance coming closer to the horizon. Almost in one sense hunting it down and in another avoiding it at all costs.

I love the lyrics on this album, they are so utterly exposed and vulnerable on the inner workings of relationships. Of how in one sense we bind ourselves tightly to another only to see it unravel before our eyes. Vaudeville Etiquette puts all these feelings together eloquently in a way that transpires to the heart of the nature of relationships, like “let’s dance with the devil ‘til it breaks our hearts” in “Helpless Heart” the lyrics are both poignant and bittersweet in the ways of the heart and the strife of love. “You were such a restless soul, easy to the touch, but hard to hold.” Is another perfect example of the craftsmanship that went into creating this honest album.

“Empty Hands” is filled with a beautiful sadness that underlines the entire song, “learn how to hold our cold and empty hands.” “Til The Wheels Unwind” has a bit of a country kick to it as the song carries the burden of the distance that builds inside relationships with unreasoning sensibilities while becoming immobile to your lover’s needs.

Aura Vista Motel ends on a bittersweet note with “Leaving Song” which is absolutely gut wrenching by shatters the listener into a million pieces with so much truth and honesty, “my love covered in rapture from the pale blue doves. I’ve got no choice but to leave you ‘til the work is done.”

What I find the most intriguing thing about this album is that there are so many layers and levels to it. It’s all from where the listener is in their life to how the music will fill their soul up. For me with each new spin I hear something new, and get a greater appreciation of the masterpiece that I truly feel that Aura Vista Motel is. This is definitely an album you will want to listen to more than once. So go out and buy a copy on CD, download it from iTunes or wait until they press it to vinyl (and they will be doing that shortly), but regardless of how you listen to it, just listen to it. It’s so worth the spin, so give it a twirl.

I’m an Atlanta-based photographer/writer who is slightly obsessed with tea. I love to capture the moments that fly by in blinks. Those fractions of time are precious for me. I can’t live without my music. I’m always jamming out to something – from folk to rock to country; basically anything with a story and beat that can take me on a journey without leaving my house puts a smile on my face. My puppy is truly the love of my life. He’s my (not so) little love bug, who is just so full of light and love. Lastly, I love simple comforts of good company with friends, wine and laughter.