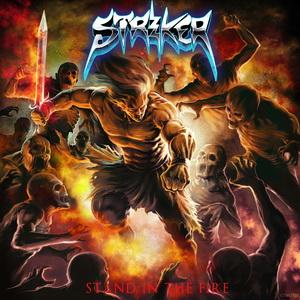 CD Review: ‘Stand in the Fire’ by Striker

Striker are one of numerous metal bands intent on revitalizing 80s metal. To clear things up, I greatly enjoy bands like Slayer, Megadeth, Motorhead and even Dokken. However, very few bands can capture the energy and excitement of that era without sounding stale or conventional. Striker keeps things interesting on Stand in the Fire, its fourth record. Saxophone collides with thrash on “Out for Blood” and it works fairly well. The band shows its hair metal influence on “Too Late.” The pounding beats and high pitched vocals make one want to reach for the denim jacket and Aqua Net. We have heard it all before, but some will find nostalgia in the cheesy choruses and shredding guitar solos. The title track is Accept lite thanks to the double bass and gnarly riff, but less aggressive vocals.

Striker essentially sounds like several bands througout the album. One track recalls Judas Priest, followed by Ratt then Metallica. It is not necessarily a band thing as the band is comprised of sharp musicians that have done their homework. However, this record is not something you have not heard before. This is a record that celebrates metal for metal’s sake and the band does not hide its intent. The guitar leads are amazing and there is the occasional killer riff, but really that is it.

Stand in the Fire is diverse enough to appeal to a fairly wide swath of music listeners. This includes hipsters and metalheads that prefer the “lighter” side of metal. That being said, Striker could achieve some mainstream exposure with this record. I could see this band playing on one of the many North American hard rock and metal festivals popping up. You should pick up this album if you want to hear a modern take on Eighties metal. I would rather hear the records from that decade instead.

For news and touring info, check out the band’s website: http://www.striker-metal.com/