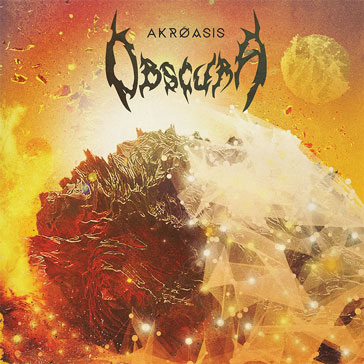 Obscura’s fourth record, Akroasis, is a metal mindtrip. The long awaited follow up to the critically acclaimed Omnivium, is a progressive musical journey of death metal, jazz and classical. The seven minute long “Sermon of the Seven Suns” is a metallic roller coaster with numerous twists and turns. “The Monist” is a hermetic cut, with its arabesque baseline and grinding guitar riffs. The guitar lead forces its way through the musical collage like a space vessel escaping a black hole. There is so much going on that the listener is pulled in several directions, yet the song is cohesive. The title track is a musical tour de force due to its fast paced nature and virtuosity. The word “akroasis” is Greek and means “hearing or listening.” Well, listening to this track, one can hear the elation the German quartet derives from playing. The band showcases its thrash roots again on “Ten Sephiroth” with its pulsating drums and jazzy basslines. This is one of the more accessible tracks on the record, based on its straight-forward structure. The sludging “Ode to the Sun” recalls mid-period Morbid Angel with its lava riffs. Obscura is not riffing off Trey Azagthoth’s legendary band, but rather paying homage.

The musicianship is extremely strong on this record. This is not surprising as numerous talented musicans have played in Obscura. However, Akroasis has amazing songs not pieces of musical showmanship. The band plays well together and each member knows when to show off and when to relent. This mutual respect makes the record interesting because you do not know what the band will do next. Production wise, it is a bit tinny at times and I wish the production was meatier. However, it does not overshadow the stellar songwriting or musicianship on this album.

Well after five years, Obscura has not lost a single step. The band retains its spot as one of metal’s most technical acts and continues to set the bar. Akroasis is a challenging record, but an enjoyable one. Technical death metal bands will have to push a little harder when Obscura keeps releasing albums like this. This is a good thing as bands will continue to push the envelope in extreme music. Give this one a listen.

For news and tour dates check out the band’s website: https://www.realmofobscura.com/