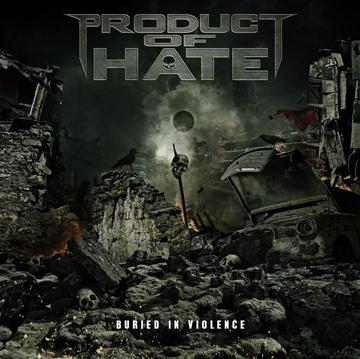 CD Review: ‘Buried in Violence’ by Product of Hate

Product of Hate bring the brutal groove on its debut album Buried in Violence. The band’s mix of death metal, thrash and hardcore will surely draw unfair comparisons to Lamb of God. However, the Wisconsin quintet has a sound completely distinct from its Virginian peers. The band’s music is no-nonsense metal that gives the listener little breathing room. The first track “Kill.You.Now” opens with a whirlwind riff before the drums smack you to the ground and bash your head in. There is a strong Haunted influence with the band’s modern take on thrash metal. The riffs are complex yet dynamic while frontman Adam Gilley barks like a madman. Things do not relent for most of the record. “Annihilation” has a hardcore groove sprinkled with speed metal riffing that makes for a maniacal contrast. The visceral “Blood Coated Concrete” would make Kerry King and Gary Holt nod their heads in sinister approval. The aggressive percussion and galloping riffs drive this track like a platoon charging towards the enemy. The only time the band shows a modicum of mercy is on the haunting instrumental “Vindicare.” The eerie bassline provides the perfect backdrop for the classical guitar lines which gradually build to a hellish peak before fading out.

Legendary metal guitarist James Murphy produced Buried in Violence. Murphy’s career spans roughly three decades and he has played in Death, Obituary and Testament. Murphy brings his knowledge on all things brutal on this record. The album is somewhat stripped down, but not minimalist. The mix is just right with punchy drums and a sharp guitar sound. It is the perfect sound for the record as it captures the band’s seriousness and no-frills style of playing.

Well, Product of Hate has certainly made its mark with a strong debut album. I can safely say this band is America’s answer to The Haunted and that is not an insult at all. The band does a fine job melding the complexity of thrash with the dynamics of hardcore, something many American metal bands struggle with. Buried in Violence is modern thrash done right and it is refreshing to hear a metal band not emulating metal bands from 1985. Product of Hate bring the violence and the mosh on this one.

For news and tour dates, check out the band’s website: http://www.therockfather.com/productofhate