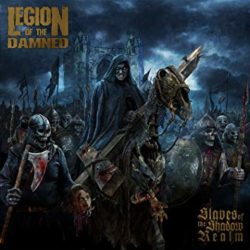 CD Review: “Slaves Of The Shadow Realm” by Legion Of The Damned

Dutch metal quartet Legion Of The Damned have unleashed its unholy seventh record, Slaves Of The Shadow Realm.

Album opener “The Widow’s Breed” is a blistering track with chainsaw guitar slicing through thrashing drum beats. The lyrical imagery of African witchcraft is especially interesting and a wonderful departure of the conventional satanic/anti-Christian themes.

Things briefly slow down on the “Charnel Confession” which maintains an uneasy rhythm throughout the song’s duration. There are numerous guitar fills that complement “Confession’s” fierty atmosphere.

“Slaves Of The Southern Cross” is a demonic grooving tune as the band plays in the pocket before speeding things up during the midsection. The chopping guitar riffs and double bass drums conclude the track in hellish fashion.

“Warhounds of Hades”commences with a colossal drum pattern before descending in to a crushing thrash number. Geel’s aggressive double picking in the main riff drives this track, and the midsection will arouse a mosh pit.

“Priest Hunt” features a haunting symphonic sample that segues in to a galloping pattern and a meat hook guitar riff. A contrast from the thrash fused black metal on prior tracks, yet it still fits on Shadow Realm.

Album closer “Dark Coronation” is the longest track on the record at a shade under six minutes. There is a hardcore punk influence on this track that elides with some complex guitar riffs making it a killer album closer.

Shadow Realm is a collision of black, death, thrash metal and punk but Legion pulls it off for most of the record. Some songs are a bit too long, causing the record to drag. Luckily, Legion’s musical prowess compensates for the album’s few low moments. The production is on point, especially on tracks like “Priest Hunt” with the extra scoop on the guitars. The band also experiments with symphonic samples and a melancholy piano intro “Slaves Of The Demonic Mind.” There are a few good surprises on this record.

Legion Of The Damned bring the goods on Slaves Of The Shadow Realm. Fans of Goatwhore and fellow Dutch metal band God Dethroned will appreciate the band’s melding of metal subgenres. However, this album falls slightly short on some tracks. Still, it is a very good album to lead us in to 2019. The dark gods will appreciate this offering.