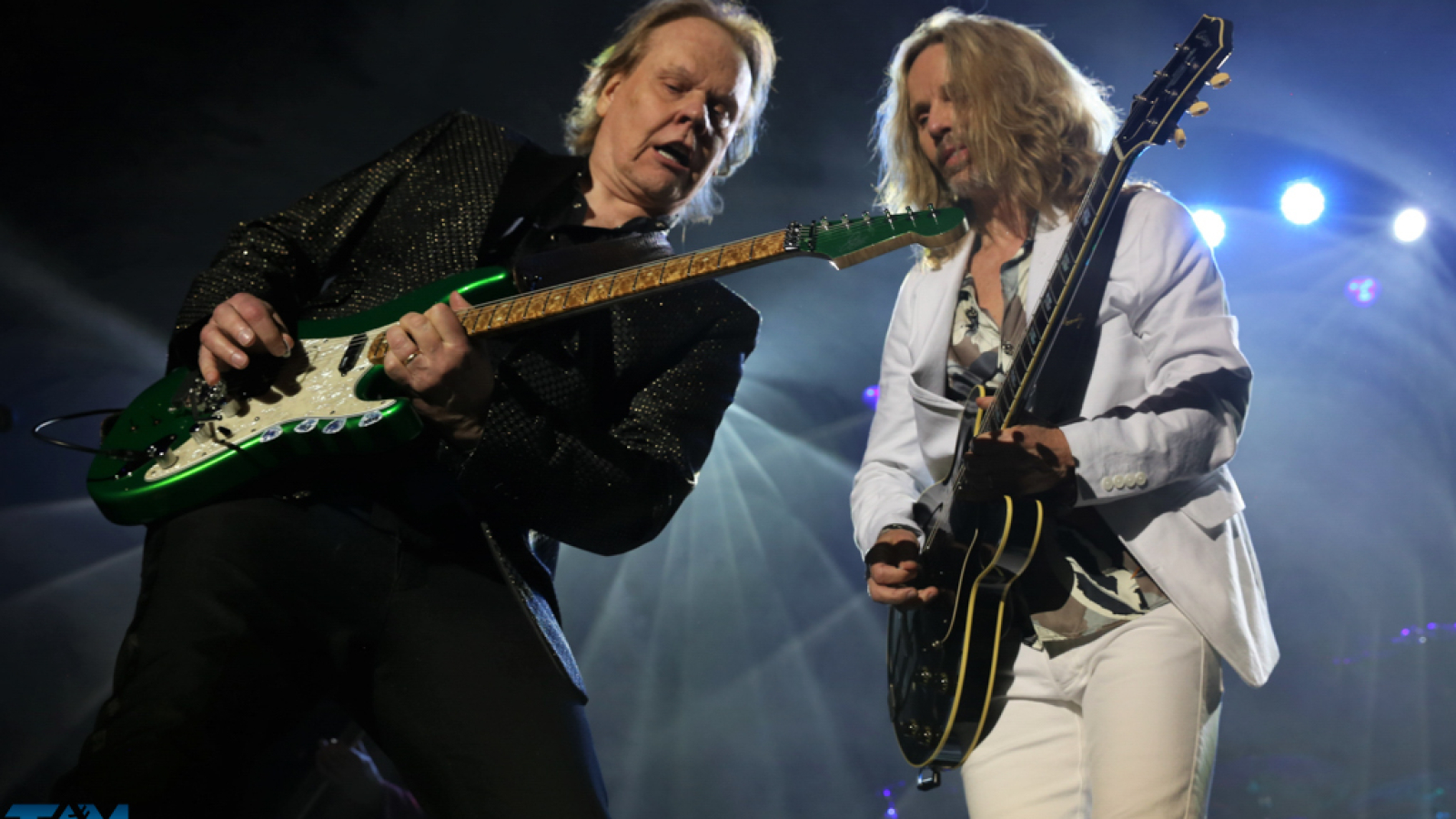 On the evening of April 21st, 2022, Styx performed to a sold out crowd in Macon, Georgia. Macon City Auditorium doors opened at 6:30 pm, and fans flowed in like a lazy river, smiling and laughing excitedly as they made their way to their seats. Soon, Styx lined up to snap pictures standing in front of the impressive looking stage.

Time passed quickly and at 7:30, the moment we had all been waiting for had finally arrived: Styx–Live! As the show began, Tommy and the band appeared slowly from a purple hue of stage lights. It is no secret that most of the ladies in attendance were swooning over Tommy Shaw dressed in tight white jeans and a white blazer over his undershirt, wielding a black Gibson Les Paul guitar. We all must admit that Tommy is the quintessential rock star!

The crowd was wild and on their feet as Styx exploded into a killer rock show like we all saw in the late seventies. Promoting their new album, Styx opened with the new song “The Fight of Our Lives”, from their latest dynamic release entitled, Crash of the Crown, which was released June 18, 2021. For two solid hours, Styx had us reeling with hit after hit, including “Blue Collar Man,” “The Grand Illusion”, “Lady”, “Light Up”, “Man In The Wilderness”, “Too Much Time On My Hands”, “Suite Madame Blue”, “Crystal Ball”, “Fooling Yourself (The Angry Young Man)”, and “Come Sail Away”. We had absolutely no time to rest between songs.

Three-fourths into the show, Tommy Shaw stopped everything to introduce a VERY SPECIAL GUEST, bassist Chuck Panozzo, a longtime member of Styx. He founded the group in Chicago with his fraternal twin brother, drummer John Panozzo and singer/keyboardist Dennis DeYoung. He toured part-time from 1999 to 2003 due to an ongoing illness and has returned with Styx on a regular basis since then, sharing bass duties with Ricky Phillips both in the studio and onstage.

In addition to the generous selection of earlier Styx classics, the band played seven new songs from Crash Of The Crown that were no less than excellent. However, they were not finished yet. Their encore took us back again, first with “Mr. Roboto” and “Renegade”! The fans rocked out to the very end and no one left early. We all knew from the beginning that during a Styx rock show … “SWEET, SWEET SOUNDS WILL FILL THE AIR.”

I was truly fortunate in my earlier years growing up to have my Uncle Bill Decker as a rock and roll mentor and concert companion. At an early age, he introduced me to 1960’s and 1970’s big names in current rock and roll music.  Currently at 60 years old, I am still rocking to the same priceless music I cut my teeth on. It is timeless, and never gets old. To date, I have seen hundreds of live shows. Incredibly, the recent Styx show, at Macon City Auditorium, ranks as one of the best performances I have seen in all my years.

Styx remains a tight, current day supergroup. If you get the chance to see this tour, please go. It is a trip back to the days when rock music touched your very soul.

The Fight of Our Lives

Man in the Wilderness

Save Us From Ourselves

Too Much Time on My Hands

Crash of the Crown

Fooling Yourself (The Angry Young Man)