by David Feltman
with no comment
Album Reviews
[tps_header][/tps_header] 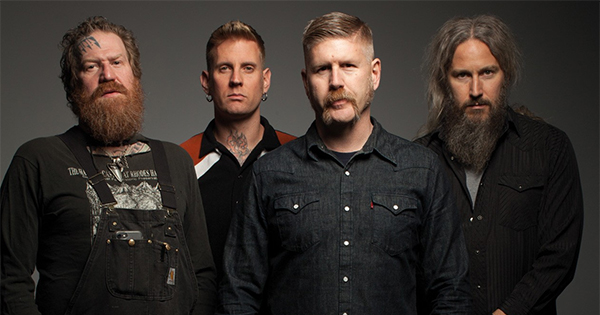 The Cold Dark Place EP bears the Mastodon moniker and the members of Mastodon are performing the songs, but this is only technically a “Mastodon” album. Fans still high on Emperor of Sand should temper their expectations. That’s not to say this is a bad album, but it’s markedly distinct in tone and temperament from what one might expect from the band.

The EP was originally conceived as a Brent Hinds solo work. Hinds created the concept behind the album, wrote all of the songs, and collaborated with artist Richey Beckett on the album art. The tracks were recorded during the Once More ‘Round the Sun and Emperor of Sand sessions, but sound little like either album. This is Brent Hinds featuring Mastodon moreso than it’s Mastodon.

Cold Dark Place was inspired by a difficult break up and it strives for a slow, melancholy atmosphere, but Hinds is too much a southern boy to resist twangy solos and funky breakdowns. It makes for some odd and occasionally schizophrenic songs. The single, “Toe to Toes” combines an Allen Toussaint/”Southern Nights”-esque acoustic intro with a chorus largely lifted from the Ozzy Osbourne/Lita Ford duet, “Close My Eyes Forever.” Streaks and flashes of classic and southern rock abound throughout the EP. These four tracks are admittedly closer to Mastodon’s body of work than it is to other Hinds’ projects like West End Motel or Giraffe Tongue Orchestra, but there’s no doubt that Hinds is the dominate creative influence.

Hinds has created a strange and interesting bird with this EP. It’s well worth checking out, but it lives more as a footnote than a follow up. Cold Dark Place will definitely draw interest from diehard fans, but there’s little meat for casual Mastodon listeners.