Editor’s note: This interview took place on November 19, 2016 at the Heroes and Villains Fan Fest, Atlanta. We have decided to put it back on the front page now that “Guardians of the Galaxy Vol. 2” is out.

Atlanta, Georgia is no stranger to superheroes and supervillains or the actors that portray them. It has become a major production hub for the Disney/Marvel films and at any given time, there is sure to be a film in production. That said, the city also plays host to some of the most popular science fiction, anime and fantasy conventions. TAM has covered its share of them over the past few years. This year, the latest of the conventions to hit Atlanta was Heroes and Villains Fan Fest (HVFF), a show that aims to bring the stars closer to their fans.

At HVFF, Gunn was kind enough to spend a few minutes talking about his work as Rocket Raccoon, what it involved, what went into it, and what changed for him in the upcoming sequel. 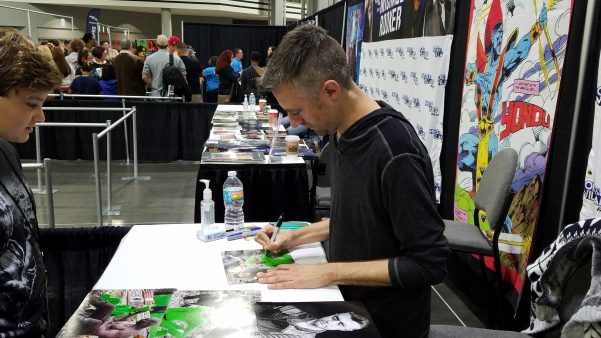 Can you talk about your performance in “Guardians of the Galaxy” and what has changed for you in the sequel? Did you learn anything doing the first movie that you could bring with you into the second?

With Rocket Raccoon, I am there to serve two main purposes. Number one, I am an actor to act in the scenes with the other actors. So, I am there, in some ways, almost as a tool for the actors in the scene, so when Chris and Zoe and Dave are working on a scene together with Rocket, they have a physical representation for Rocket that is an actor that they are working with. So they’re not talking to a blank space, or talking to someone reading lines from a script off camera or something like that. Instead, they have a real actor that knows the scene and has rehearsed with them.

I also provide some of the reference for the visual effects team so that when they go in and are putting in their assembly of how Rocket is eventually going to move, they use my face and sometimes my hands and shoulders as physical reference for how Rocket moves.

It’s a whole team of people who go in to creating Rocket, and I am one member of that team. Ultimately, Bradley Cooper comes in and really brings life into the character and fleshes it out and does the voice and final performance.

We really kind of learned on the fly in the first movie. We didn’t know exactly what our process was going to be. I just knew that my brother [James Gunn, the director], wanted an actor that he trusted in there because making Rocket look realistic was job one for the movie, I think. So we kind of figured it out through the course of the first movie. For the second movie, we made very subtle adjustments to things. The one that I liked the best was that I was wearing a gray tracksuit instead of a green onesie. So, that was a little more comfortable. I also did more shots in the second movie than I did in the first one. The first movie, we concentrated more on only the scenes where Rocket was talking, but in the second one, we kind of did a visual reference for every shot, including all the action shots. Just in case… sometimes it was helpful, but it isn’t always. Other than that the process was mostly the same. I think that the rapport that we developed as the Guardians on set, working through some of those group scenes on the first movie seemed to work really well. So, we did a lot more of the same in the second movie.

When you first played Rocket, did you have to find something different as an actor to tap into to portray him?

You know, if you think of acting as input and output, the input being the work that the actor puts into their performance and the output being what ends up on screen, my input is very, very similar to any other role that I play. I tackled the role of Rocket very much the same way I would have tackled it had I just been playing the role in a play, crawling around on my hands and knees and acting it. It’s very much the same.

But, the output is very different, because it’s not my performance that ends up on screen. There are parts of my performance that end up in the movie, but it’s not really why I am there. I’m not there to play the role that I would if we were performing a play. So, I think that the takeaway is that, by putting my all into trying to capture some of the essence of Rocket, that’s the best tool that the animators, director and Bradley have at their disposal when they’re going in and doing their work on the same character. So, I don’t look at the role as being terribly different, but they end up being very different.

“Guardians of the Galaxy 2” is being released by Disney/Marvel in May 2017.