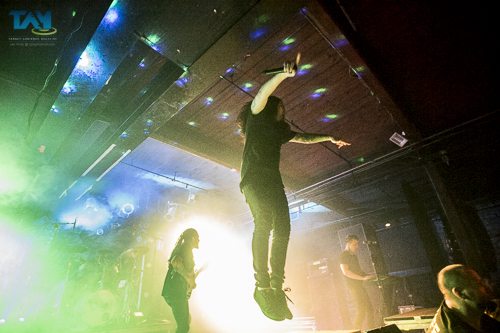 Sumerian Records packs the Masquerade on their 10 Year Tour

Review by Daniel Karasek, Photos by Shaun’s Krisher (Photo gallery at the bottom)

The air was heavy with metal as the Masquerade filled with rockers ready for a night to remember. Outside, smokers gathered to regale each other with stories since their last meeting. Inside, the crowd started to fill heaven and bunch up around the stage. Merch vendors were hustling shirts and posters, selling out of their stock before the first band took the stage. The entirety of Masquerade was in motion for another great night at the venue that Nick Folio, the drummer for Bad Omens, called “his favorite venue in Atlanta because it’s legendary.” Sumerian Records had the spotlight with their 10 Year Tour featuring five of their signed artists including Bad Omens, ERRA, After The Burial, Upon A Burning Body, and Born of Osiris. Props to Sumerian for putting together one killer lineup that fans clearly approved of since the show was sold out.

Bad Omens, hailing from the City of Angels, kicked off the evening with the spunk surpassing their maturity as a band. It’s amazing that they have only been signed with Sumerian since spring of 2015 and yet have the presence of a seasoned act. When they played their debut single “Glass Houses” the crowd was entranced by the power behind the jam with moshing and general mayhem spreading around like wildfire. Overall, Bad Omens is an act to keep your eye on.

Next up was ERRA, an act from Birmingham that takes pride in their intense live performances. Before they even took the stage, the crowd was hyped to see their performance, with one rocker, Daniel, remarking that “ERRA is dope.” Those three words hardly did ERRA justice. Their performance displayed their professionalism and talent that their fans adore. Their sound stood apart from Bad Omen, not in any better way, but as a different flavor of metal to mix up the night. ERRA really put their heart and soul into their performance to give their fans a genuine, polished set. ERRA is definitely an act not to miss next time they are in town.

As the middle act of the night, After The Burial kept the night going strong. The quintet from Minnesota boasts unparalleled, eight-stringed riffs and killer chord progressions that were definitely apparent in their performance. In the midst of their shredding, After The Burial took a moment to talk about their recent album Dig Deep that almost was canned when tragedy struck the band with the death of their founding rhythm guitarist Justin Lowe. However, the band said that they “put the pieces back together” and “reached down inside themselves” to finish the album, hence its title. They then followed up with “Aspiration” as a thank you to their fans for all of their support. It’s not often you see a band push through such tragedy and stay unified in their direction. Props to After The Burial for being an overall class act that won’t let anything hinder bringing their music to the world.

Following After The Burial was Upon A Burning Body, a five piece metal and hardcore hybrid from San Antonio. After paying their dues and taking strides in the underground, self-promotion scene, Upon A Burning Body has now taken the national spotlight as a full time touring band. Their set at Masquerade rocked the floorboards not only with the music, but also with the crowd matching Upon A Burning Body’s energy. There were circle pits for days during their entire set, from “Red Razor Wrists” to their closing songs “Texas Blood Money” and “Intermission.” The potential of this band seems limitless as they break ground as a defined, refined new voice in the metal scene.

Closing out the night was the trendsetting band Born of Osiris. Before their set even began, their merch booth was sold out of merchandise. Hailing from Chicago, this six-piece act exceeded the reputation they have for their critically acclaimed sound. They played both old and new songs, including “The Other Half of Me” from their new album Soul Sphere as well as “Follow the Signs” from their second album Discovery. Although the crowd seemed wiped after raging for After The Burial, the energy somehow, by the grace of Cthulhu, came back almost twofold. The moshing continued with the crowd showing their love for Born of Osiris. Props to Born of Osiris for being able to keep the night pumped, even though they played after four solid metal acts. Born of Osiris proved once again that they can hold the banner as a game changer in the metal scene. Definitely should catch them next time they visit.

Overall, the Sumerian Records 10 Year Tour killed it. The Masquerade was so lit I’m surprised it didn’t catch fire. It’s good to see the iconic venue hold up to its reputation despite it being on the verge of shutting its doors and moving to a new location. You should catch a show at the Masquerade before it’s too late.

Tickets for the remaining dates on the Sumerian Records 10 Year Tour are available at the website.