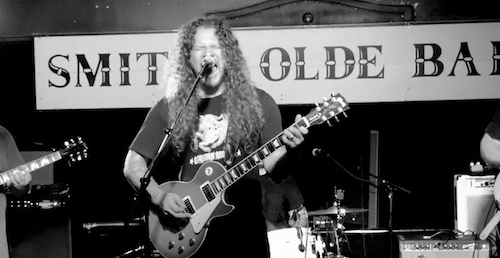 Photos by Tori Radcliffe (Gallery at the Bottom)

The evening of August 15th hosted a slew of events in Atlanta that pulled people out of their weekly routines to venture out into the city. Dave Chappelle was in town causing a ruckus of laughter as is his style. Evanescence and Lindsey Stirling were also gracing Atlanta with their talents in a joint tour. However, the right place to be was at Smith’s Olde Bar for their showcase of some of Georgia’s own rock and roll acts. The lineup, consisting of Hush Money, Magnolia Moon, and Whiskey Tango, brought down the house as each band put years of practice into action to entertain their fans. Even some of the usual barflies drifted over to Smith’s venue to witness the talent that took the stage that night.

First up was Hush Money, a band hailing from Ellijay. These guys played some solid hard southern rock and really showcased their talents in their performance. Hush Money is your classic four-piece band with two guitarists, a bassist with a five string bass, something that adds extra depth to their music, and a drummer. However, they don’t just have one lead singer, as that would be too dull for these good old boys. During their set, the band switched between their two guitarists and drummer taking the vocals on different songs. Yes, Hush Money has three lead singers, each with a different register. These guys are definitely a band to check out as they bring their unique multitude of talents to the Georgia music scene.

Next up for the night was Magnolia Moon, another four-piece band that graced us with their presence all the way from Macon. On first look, these guys have a very southern appearance with the expectation of possibly some country or light southern rock, but Magnolia Moon is anything but light. These guys hold true to their tagline of “grit, soul, and rock ‘n’ roll” with their wicked sound of true southern rock. Imagine if Hendrix and Lynyrd Skynyrd had a baby and you might get close to the mind-blowing music of this band. Their entire performance I had a breakout of goosebumps all over, unable to turn my attention anywhere but at Magnolia Moon. Their frontman and lead guitarist Zack Horton really owns the stage when he plays. With his band behind him, these guys are going places.  As it was their first time playing at Smith’s Olde Bar, I am really looking forward to them coming back to Atlanta. At the very least I want a taste of their cover of “War Pigs” as it would give Ozzy a run for his money.

Closing out the night was Canton’s own Whiskey Tango, yet another four-piece band that is hard to nail down just what they are. To take a stab at it, they are a glam-punk-southern rock band that puts the show in showmanship. Their lead vocalist/guitarist came out on stage to an intro by his bandmates dressed in an open-front purple leotard with a stylish coat. But instead of the standard glam 80s rock sound to match this glorious introduction, Whiskey Tango went right into their set that was brimming with savage guitar riffs, stage dives, behind-the-head guitar playing, and even a backflip. The energy they put off well exceeded the needed quota for the night as the crowd kept their attention on the stage for the next antics the band would get into. And overall, Whiskey Tango looked like they were having a blast up on stage, like the band equivalent of when your favorite song comes on the car radio and you break out in a small musical number. They even threw in a cover of “Under Pressure” that got the entire venue involved in a sing-a-long. Whiskey Tango is truly an experience, not just a band, that you have to witness in person.