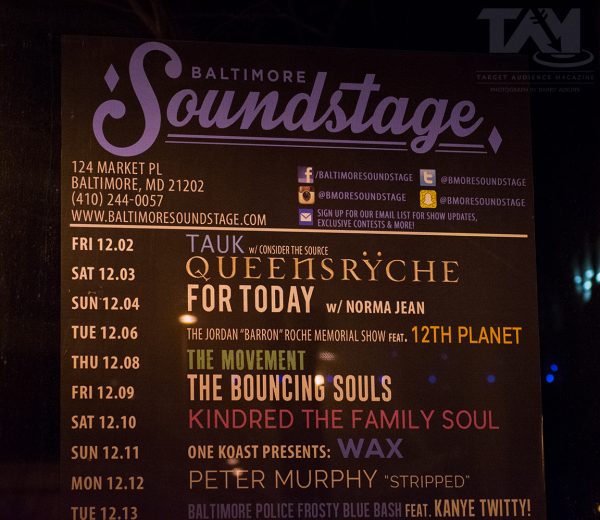 15 years ago, by accident, I stumbled upon a copy of Queensrÿche’s Greatest Hits album.  Enticed by their logo, I took a chance on their music.  To say I was blown away would be a vast understatement.  The heaviness, the melodies, and the twin-guitar harmonies were enough to win over my ears.  With each album I bought, my appreciation grew deeper and fandom stronger.  Queensrÿche has long been one of my favorite bands, despite line-up changes, but I had never been to a show until last Saturday night, Dec. 3, 2016, when the band came to play the Baltimore Soundstage, along with Armored Saint and Midnight Eternal.  Not only did I have the pleasure of attending the show, but I had the honor of doing photography for Target Audience Magazine in the process!

The opening act for the night was NYC-based symphonic metal band, Midnight Eternal.  Fronted by the very talented Raine Hilai, whose vocal range is quite wowing, and backed by a formidable band, the group received wide-ranging applause after every song.  Guitar theatrics from Richard Fischer, thick bass lines from Greg Manning, and powerful drumming from Dan Prestup helped to warm up the crowd, who had hurried in out of the chilly Baltimore night to see this show.

80s heavy metal veterans, Armored Saint, were up next.  I must confess, barring listening to one song by this band and the previous one, I had never heard any of their music.  As a man without expectations, I was impressed!  The sheer immensity of energy radiating from these individuals was quite quickly felt throughout the entire room.  If anyone had murmured a word about wanting to skip straight to the headlining act, that thought was squashed by song-after-song of high-intensity aggression.  Frontman John Bush was on fire from start to finish, and both guitarists, Jeff Duncan and Phil Sandoval, brought the attack to the crowd.  Bassist Joey Vera was a man of many faces, and one of my great defeats of the night was being unable to keep up with these exploits as I shot the show.  Last, but not least, drummer Gonzo Sandoval was solid behind the kit, and looked to be having as much fun as the audience!

One worrisome moment occurred when Bush stepped forward onto a stage monitor, but that monitor wasn’t exactly on the stage.  Due to limited space, the monitors had been set upon rolling crates in front of the stage, resulting in Bush crashing down into the photo pit.  With some quick reflexes he caught himself on the crate, preventing himself from meeting the floor.  Security was quick to come to his aid.  To everyone’s amazement, he barely missed a beat; continuing to sing throughout the fall as though nothing had happened.  He received quite a huge applause at the end of that song, and he commented, “No show is like another!  One show we play these songs, another we play that, and tonight you got to see the lead singer fall on his face.”  I’ll definitely be looking into this band more intensely now.

I could hardly wait for Queensrÿche to take the stage.  Armored Saint was positively thrilling, but I’d been waiting 15 years for this concert.  They unleashed the photographers shortly before the band came on, giving me time to snap a shot of the setlist and geek out a little at knowing what the concert would hold for us before anyone else.  The first three songs, the ones I would get to shoot, were “Guardian,” “Operation: Mindcrime,” and “Best I Can.”  The lights on their LED board glowed with an introduction of the band, and drummer Scott Rockenfield banged out a forceful musical accompaniment.  His headlamp illuminated his sticks and drumheads as he went.  The crowd’s cheers grew as other members of the band took their positions onstage, before launching into the opening track.  Singer Todd La Torre ran past me in his studded leather jacket to command things from the front of the stage.

Before I knew it, the first three songs were over.  I was perhaps a little too caught up with having my musical heroes within a few feet of me to really keep track of the time [but not too caught up to miss snapping what I hope are images that you will enjoy viewing].  The rest of the show was for me to watch from stage right, enjoying how they pulled such a diverse collection of songs from their back catalog.  There was quite an even number of tracks from their first six albums (that’s all the way up to Promised Land), and even a few from this incarnation’s latest release as well.  I was overjoyed that they played “Eye9,” one of my favorite tunes from the new album, Condition Hüman, featuring hefty bass lines from Eddie Jackson.  Guitarists Michael Wilton and Parker Lundgren were in top form as well, sharing lead guitar duties and melting them together in the classic Queensrÿche fashion.  The evening closed out with the final Mindcrime track, “Eyes Of A Stranger,” which left everyone in the audience begging for more as the band tossed guitar picks and drum sticks into the crowd and bid them adieu.

For those that endured the weather outside after the show (like I did, for an hour and a half), they were treated to some kind smiles from the frigid band members.  15 years of feelings welling up inside me, I should have known it wouldn’t be possible to convey myself as well as I’d have liked.  For that, I would have needed to invest in one of the VIP tickets.  But I managed to shake hands with Michael and Eddie, and tell them how excited I was to be experiencing one of my favorite bands for the first time.  That was it.  I didn’t have anything for them to sign.  I didn’t ask for anyone to take my picture with them.  I just thanked them and walked home.  And you know what?  Thank you, Queensrÿche.  It was a damn good show.