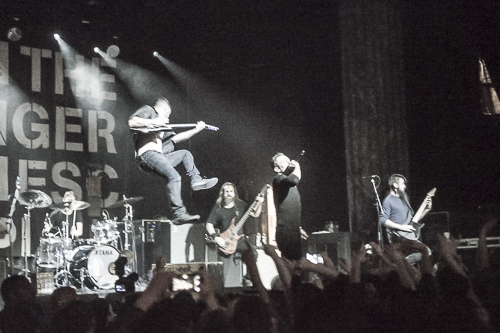 The Dillinger Escape Plan played at the Variety Playhouse on Friday, November 11th, touring in support of their final album, Dissociation. The Variety Playhouse is a beautiful WWII-era Art Deco movie theater cum music venue featuring a large balcony.  The Variety Playhouse just completed a top-to-bottom renovation after its recent purchase by Agon, which also owns the Georgia Theatre in Athens. After twenty years and eight albums, The Dillinger Escape Plan is breaking up amicably to pursue different projects. Their final album, Dissociation, continues their recent trend towards moodier, more cinematic music. Dissociation may be slow and evocative in places, but Dillinger Escape Plan still treads the line between order and madness. You hear more of Greg Puciato’s range as a vocalist. I’ve seen Dillinger several times at the Masquerade, and it was nice to see them at the Variety Playhouse with it’s larger stage and better lightshow. Cult Leader, from Salt Lake City, Utah, Carbomb, from New York, and O’Brother from Atlanta, are joining them on tour.  This tour of performances will finish up its American leg in Burlington, VT on November 17; Huntington, NY on November 18; and Hartford, CT on November 19, and then three shows in Canada, and then it’s off to Europe.

Cult Leader opened the night up. Three of the four members of Cult Leader played together as Gaza, a highly-respected grindcore band which itself dates back to 2006. Cult Leader released their first EP in 2014 on Deathwish records, and followed it up with a full length, Lightless Walk, and another EP, Useless Animal, both in 2015. They opened the night up strong, and I felt a lot of charisma coming off the front line of the band. The crowd was largely receptive. No one I talked to had seen them before, but enjoyed their set.

Carbomb played second, after their very impressive massive drum kit was assembled (two  snares, two kick drums, four toms, and twelve cymbals!) It was worth it, because their drummer is incredible. The whole band was very tight, frequently stopping a blistering mosh breakdown on a dime. Carbomb formed out of two other bands, Neck and Spooge, who were sharing a rehearsal space in New York. Their sound is distinctly New York Hardcore, but with a progressive slant on it. It’s a great angle.  The crowd loved it and the first mosh pit of the night made its appearance.

O’Brother, the penultimate act of the night, are very talented, if not a departure from the tone of the rest of the lineup. They remind me of Mogwai or Explosions in the Sky, but spacier. Some of their material is heavy, but nothing as screamy or bludgeoning as Carbomb or Dillinger Escape Plan. Nevertheless, the band threw themselves into their performance, and the singer was charming. Their band features a baritone guitar player (this instrument is halfway between the bass and the guitar) which thickens their sound considerably. Their arrangements were lush, but still allowed for some extended improvisation. O’Brother formed in Atlanta in 2006. They just released their third studio album, Endless Light, this year.

Before our headliner came out, the security guards warned me that they’d heard about them, and about how crazy their shows can get. If things got too bad up front, I wouldn’t be allowed to shoot for the full three songs I typically get. Dillinger is known for breathing fire, leaping from rigging twenty feet into the air into the audience and other antics. Fortunately, things didn’t completely devolve until after my photography was complete. The Dillinger Escape Plan took the stage, launching into Limerent Death, the first single from their latest album. They sprinkled in a number of their classic hits, like “One of us is the Killer” and “Sunshine the Werewolf” (A personal favorite!) Dillinger was formed in 1997 and went through some lineup changes in the early years. The man anchored at the center is guitarist Ben Weinman. Weinman is an intense performer, hurling himself and his guitar around the stage and into the crowd. No one in this band is a slouch on stage.  But Weinman is in all places at all times. The band played a full set followed by a 3 song encore ending with “43% Burnt”, from their debut EP, released 17 years ago.

I met fans that drove five hours to see this show. These fans were 3 when Dillinger’s first EP came out. Most bands with this long of a history hit a rut, get a sound and run with it for their careers. Dillinger has never been afraid to reinvent themselves over and over.