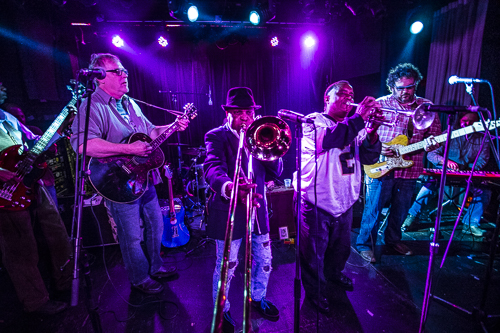 The weekend following Thanksgiving this year started off on Friday with a rock and roll showcase in the Music Room at Smith’s Olde Bar. Patrons were in attendance in droves to enjoy a nice retreat away from the black Friday madness or perhaps to escape their in-laws for an evening of peace. As soon as the doors opened for the Music Room, the crowded downstairs bar dwindled down as people tricked upstairs to find their spot in the venue. On the menu for that night was a three course meal for the ears featuring the Last Waltz Ensemble with guests Last Electric Rodeo and Jive Revival.

To kick off the night, Jive Revival turned the venue into a rock and roll lounge. Hailing from Cumming, these four guys play some mean jams. Jive Revival has that spunk and spirit found buried in the music scene of the 70s but in the modern day. They have a fun time up on stage while keeping it tight in their set. Their bassist and guitarist kept cuing each other to stay on the beat with their drummer keeping a steady pace on his kit. And a special shout out to their lead vocalist as the man has chops. Jive Revival definitely put soul in their craft and were a sweet surprise as they were just the opener.

Following as the supporting act for Last Waltz Ensemble, my good friends the Last Electric Rodeo of Florida took to the stage. Comprised of a 12 person troupe, this band goes all out to make each performance an experience. Their appearance is that of a motley post apocalyptic surfer rock band that roamed the wasteland on manic adventures to spread visions of the future. The artistic detail put into their show really centers the vibe on the messaging behind the band’s outcries of prophecies yet to unfold. On top of the massive band they boast on stage, the Last Electric Rodeo has two light-up hoop dancers and a single dancer who is dubbed “black rose” as part of the band’s backstory. The band played my personal favorite of theirs called “Last Show on Earth” that welcomes its listeners to the final performance in the apocalypse. As the Last Electric Rodeo has only been to our fair city of Atlanta twice now, I look forward to their next performance and to what they do next as a band.

As the headliners for the evening, the one and only Last Waltz Ensemble shared a moment of their time with those at Smith’s. An Atlanta native band, these guys are a tribute band to the famous music of Bob Dylan. From their first song, I can say they do Dylan proud. The band itself is comprised as more of a six-member jam band with one on keys, a drummer, three guitarists with one an acoustic, and a bass player. These guys kept a good balance in their playing, which is hard to do with some many musicians on stage. To showboat some more on their well seasoned talent, the Last Waltz Ensemble added in some more musicians with their guests Kevin and ET from the Dirty Dozen Brass Band who played trombone and trumpet. These added horns gave the music just the right amount of pep to complement the already solid vibes and tunes of Bob Dylan. I highly recommend seeing the Last Waltz Ensemble if you take a liking to Bob Dylan or if you just enjoy some good music.

Smith’s Olde Bar will always be a home to musicians both with roots in Atlanta and those passing through on the breeze. Next time you have a free evening, give them a look to see what talent is gracing either Smith’s Atlanta Room or Music Room with tunes.