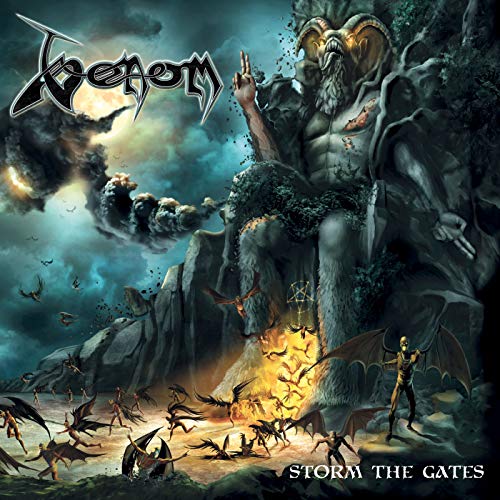 The devil’s favorite metal trio from Newcastle returns with its fifteennth studio album, Storm The Gates. “Bring Out Your Dead” opens the record and is the initial single. It is a straight forward track with a stomping groove and a plodding guitar riff. Cronos’s signature raspy vocals are in diabolic effect and guitarist Rage throws out a chaotic lead to top it off.

“The Dark Lord” shifts between a dissonant, dreary psychedelic riff and a grinding mid-tempo riff. Venom proves it is capable of writing strong material and this is a top track. The crunching “100 Miles To Hell” commences with a simple guitar riff before the drums kick in to high gear. It is a no frills headbanging track. The ax swinging riffs on “Destroyer” complement drummer Dante’s slow galloping beat while Cronos sings during the fills about demons and the apocalypse.

Things speed up on “The Might Have Fallen” as Dante’s relentless drumming surprisingly does not let up. Rage’s buzzsaw riffing is primal black metal and reaffirms Venom as the fathers of the sub-genre. The title track concludes the album with a sloppy punk edge mingled with NWOBHM guitar riffs, as it should end.

Venom were notorious for playing bad and lacking the musical prowess of its contemporaries. This is unfair, as the band can certainly play complex music, which is evident on tracks “The Dark Lord” and “Immortal.” However, this is black metal, which is devoid of the pretentious pomp found in other metal sub-genres. Storm The Gates is straight forward, Satanic metal with a fusion of punk for good measure. Some tracks are a little weak, but the overall product is Venom.

Fans of Venom will enjoy Storm The Gates with its 13 tracks of unfettered, diabolical fun. However, if you never liked Venom, this record will not change your mind. Folks new to black metal should check this record out to understand its origins. Venom stormed the gates and were victorious.