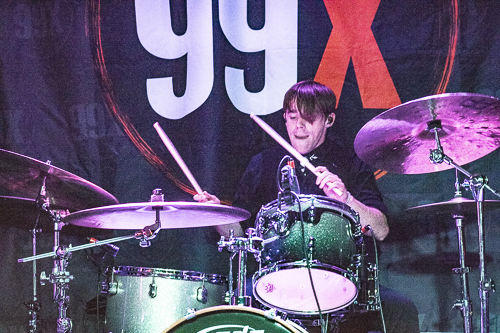 Live Review: 99X’s Down But Not Out Show

Photo Galleries by Shaun Krisher (galleries at the bottom)

\A tragedy has recently struck the Atlanta airwaves. The longstanding 99X radio station, one that has been around for over 25 years, has been kicked off the air by the FCC. Due to a conflict of overlapping stations, our beloved alternative station was curtly cut from the listening options of commuters and culture enthusiasts alike. With this sudden tragedy, heros rose to show their support, and by heros I mean four killer bands who decided to play a benefit concert at Vinyl for 99X justly called “Down But Not Out”. The great talent behind Chelsea Shag, Sarah and the Safe Word, The Stir, and Zale came together under the banner of 99X to help raise awareness and send the FCC a message that they made the wrong decision to take down a legacy of Atlanta rock and roll. People flowed into Vinyl on April 17, each one signing his or her name to declare their support for keeping 99X on the radio. And of course to listen to some killer talent.

To kick off the night, the illustrious Chelsea Shag took the stage. Hailing from Nova Scotia originally but an honorary Atlanta native, her sound is reminiscent of the roots of true rock and roll, even paralleling the classic sounds of Hendrix himself with her cover of “Fire”. Her slick guitar licks make her a standalone in the Atlanta music scene as a guitarist without any gender baggage attached. She is definitely a force to be reckoned with. And a shout out to the band’s bassist and drummer as well. That trinity of talent made for a killer live show.

Next up was the one and only Sarah and the Safe Word. Representing the north side, these cabaret rockers run a tight set that puts a tapping to ones shoes. Opening with their classic hit “Don’t Ask Questions”, a personal favorite of mine, the band kept a professional, playful energy that can only come from trained musicians. From their performance you can tell this rag-tag group of misfits belong together on stage, from their flawless ques between each other to the playful vulgarity found in comradery. They carry a great energy that even opens itself up to being a safe space for LGBTQ and additional letters community. Sarah and the Safe Word, regardless of how bigoted you are, is a shining example of the many faces of positive artistry in music.

Following these two marvelous acts was the trio of rockers that is The Stir. A true homage to rock and roll, The Stir brings a raw sound that beckons for headbanging and tom folery. From song one, they kept the energy of their show at a ten, sometimes breaking to an eleven, while almost casually playing together as if they were jamming at a practice session. It is always a treat to see a crew of talent decide to ride the rails of true rock and roll, both in style and execution. Each song had a cohesive drum beat that kept the wicked bass lines and guitar licks wailing throughout Vinyl to an eager crowd just wanting more and more. If you have an open night, check these guys out at a live show. They will be going places.

Last but not least, we had the one and only Zale perform with front women Hannah Zale. This little diva packs a punch vocally and knows how to run a stage during a show. At the start of their set, Hannah gave anecdotes on how 99X was the radio station that really put her on as an artist and how she was proud to support them in getting back on the air. From there the set went off without a hitch, well except for the bassist having to switch to a four string from a five string. However, the talent behind Hannah had just as much charisma and rose to the challenge of technical difficulties. And considering how clean they sounded with the handicap, I can’t imagine what they sound like unhindered. Zale, even following Sarah and the Safe Word, killed it, and personally I can’t wait to see where this band goes in their musical career.

It is tragic what happened to 99X. If you are interested in helping get them back on the air, check out their page “Down But Not Out”. Also, a shout out to Vinyl for hosting the event in support of such a great station.