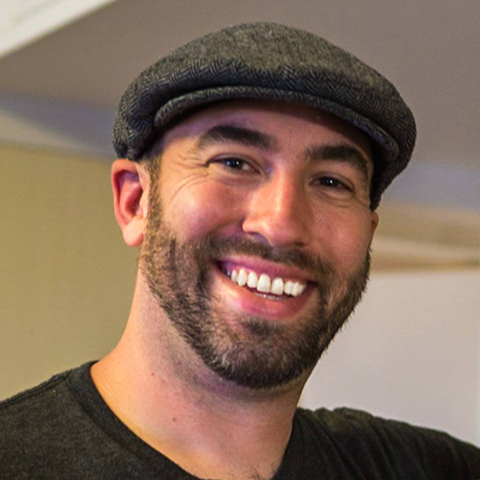 At Dragon Con 2015 in Atlanta, makeup artist and two-time Face Off contestant Frank Ippolito sat down with Target Audience Magazine.

Ippolito has worked on films like Pirates of the Caribbean: Dead Man’s Chest and At World’s End, and has also done a number of projects for Tested.com. One of his most recent projects with Tested.com was the Rancor (Star Wars: Return of the Jedi) monster suit that rumbled around San Diego Comic Con 2015.

Frank owns his own shop in Burbank where he continues to work on multiple fx jobs as well as personal projects for his film company, Ghost Works LLC. He continues to be a contributing columnist for both Makeup Artist Magazine and Tested.com

Before you were working full time as a makeup artist, what were you doing to hone your skills?

I don’t think I’ve ever done anything else. When I was in I was in high school, I didn’t really have a “normal pay” job like a lot of people end of getting. I’ve just always done this, so I don’t know anything else. All I’ve ever done is build things. Racing motorcycles and making monsters is really all I do. I can boil it down to just those two things and that makes me happy.

With makeup, casting and molding, supplies can be really expensive. For people who are just starting out and have a creative itch they want to scratch, or a costume they want to build, do you have any money saving tips?

Well, to start going down that path, a lot of it revolves around the art, and if you can even do that. I do a lot of the technical end as well, which is where a lot of the expensive materials come in, but if you want to do this as an art-form, it’s actually kind of cheap to start off. Really, all you need is pen and paper to start drawing and some clay to start sculpting. You can get clay really reasonably priced.

I had a friend who went to Art Center in Pasadena, one of the best industrial design schools that there is. I asked him how everyone at Art Center was so good. He asked “How many drawings a week did you do when you were in college?” I told him “I don’t know, maybe 10 or 20 drawings a week.” He said “Do 100 and then see where you are.”

So, that carries over into all of this stuff too. If you want to be a good sculptor, how many sculptures do you do in a week? Clay isn’t expensive. You could sit and just make little maquettes. You don’t have to start out by building a big, giant Rancor like I did this year. You can do small things to really hone those fundamental skills, and that’s not super expensive.

When you do find a project that you want to build larger scale and go down that path, there are always ways to save up the money if you want it bad enough. If you get the money, fail on the project and screw it up, then that’s a lesson learned. There is nothing wrong with that. Take the time and work real hard. There is no mysterious secret. You don’t have to go and spend tens of thousands of dollars on materials. People can dive in and start small. Is there one thing that you’ve learned in these past 20 or so years that you still carry with you?

There are two mistakes that I think people make:

One is a fear of failure. I’m not afraid of screwing something up. I’ve made molds that have gone terribly sideways and made makeups that just aren’t good. But, that’s fine. You can’t be afraid of doing something poor. As long as you learn from it, it’s not a bad mistake.

That’s it. It’s simple stuff. Things don’t need to be complicated. Start off real simple, but do it. You have to want to wake up in the morning and start sculpting and do it all day long. You mentioned the Rancor that you built earlier and debuted this year at San Diego Comic Con. How many people worked with you on that project?

I was building the Rancor at the same time my shop was building these spacesuits for a video-game that was just announced called Law Breakers. So, I had a lot of people in the shop working for me at the time. I think it was seven or eight people working for me in the shop. I did a lion’s share of work on the Rancor, but there were about seven people that helped at different times. Two people helped make the chain on the arm at the eleventh hour because I realized we had forgotten it. When I was sculpting, I had Regina, who works for me, work on the teeth. I love collaborating with other artists.

It’s a strong skill to be able to work with other people not only as their boss, but as their equal. I work WITH people. People don’t work for me. I like bringing my friends into projects, because that’s half the fun. I have a pretty open door policy in the shop most of the time. My friends will come over and tinker on their own little projects when it’s slow, though it hasn’t been slow at my shop in at least a year. It’s a good problem to have.

What was Phil Tippet’s (original designer of the Rancor in Star Wars: Return of the Jedi) opinion of your Rancor suit?

You know Phil approves of your work if he says something like “You did such and such wrong.” He’s a bit quirky like that. He’s the coolest guy ever, but he doesn’t really do praise. It’s not his style. “Yeah, that’s cool… you forgot to do whatever…” means yeah, he likes it. The whole crew at his studio saw it and they think it’s cool. They told me they think it’s cool.

Out of the projects that you’ve done over the recent years, especially with Tested.com, which has been your favorite?

I think that the Rancor is really impressive. It’s a big monster suit… it’s really neat. I’m working on making some upgrades to it, like a counterbalance for the arms. The arms don’t weigh a lot in total, but once you have the leverage of those arms so far out, it just becomes unbearable. So, we’re building a system that goes inside of it to counterbalance the arms so they’ll be easier to move around. Once we finish those, the suit will be a little more mobile, so we will probably try and bring it around to different shows.

Every time I do a project, there is always that moment where I say to myself “This is so cool… how am I ever going to top it?” Then two months later, I am doing something else and saying the exact same thing to myself. It’s constantly revolving. There’s always new things that we’re building that are the coolest.

Have you noticed that there is increased interest from the Hollywood machine in makeup and practical effects?

I don’t think that practical effects ever went away. I don’t even think that they ever really slowed down. I think the business changed as it always changes, but there has always been a steady stream of stuff. I think a lot more stuff is being done digitally, but there’s also a lot more movies than there was in the past. I think that people that say practical went away just don’t work as much. I don’t think they work as much because they didn’t change their business model to fit what the industry is changing to.

Phil Tippet, for instance. When things started to go digital, he didn’t hang up his stop motion stuff, he opened up a digital company. He progressed with the times. If you look at Stan Winston’s shop, as things were progressing with 3D printing, he became king of the robot suits. Starting with Iron Man and stuff like that. They design things in the computer, 3D print them and then you have robot suits.

When people see the writing on the wall, see how things are progressing and grow with it, they don’t have problems. I think it’s people that draw the line in the sand and refuse to change with the demand, those are the people that have issues. You have to play with all of it. At my company, we do a lot of stuff digitally. I get assets from video game companies who will send me character files and then I sometimes pattern straight off of that, or send it to get 3D printed. You have to change your business model to fit what the industry’s evolutions are.