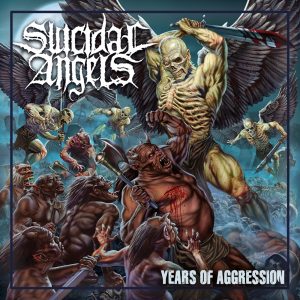 Greek thrashers Suicidal Angels aim to live up to the title of its seventh release, Years Of Aggression. The whiff of nostalgia is present throughout the album, with Eighties era guitar riffs meshed with stellar leads compliments of guitarist Gus Drax. Unfortunately, the album falls a bit flat as the aggression is somewhat repressed. Album opener “Endless War” commences with a swarming guitar riff that transitions in to a tight galloping riff. Front man and guitarist Nick Melissourgos provides sharp, raspy vocals that fit the gripping nature of the track. However, it is Drax’s blistering, neo-classical solo that is the highlight on this track. A strong opening, however, it leaves one with the impression that the band could play faster and heavier. This feeling is slightly diminished on “Born Of Hate” with its Swedish death metal vibe. The guitar work is superb as Melissourgos and Drax trade off swift guitar lines, but this track is still marred by a lack of pushing the envelope. The title track is dynamic and drummer Orpheas Tzortzopoulos pounds his kit like a madman. The quartet hit the nail on the head at the album’s halfway point on “D.I.V.A.” which is the shortest track on the album. The ripping riffs are supported by relentless yet technical drumming. It is just a shame that Suicidal finally finds its aggression when the album is halfway over. The main riff on “Order Of Death” hits like a mallet to the gut which is only exacerbated by the walloping drum beats. Drax unleashes a sweeping guitar lead that adds to the madness. “The Roof Of Rats” is pure, primal thrash with a encircling riff that will incite a mosh pit. The song’s midsection slows down for a breather before the band begins its second assault on this track. Album closer “The Sacred Dance With Chaos” begins with a disturbing clean guitar passage before the electric guitars take over, maintaining the same dissonant riff. The dark groove invokes a dance macabre that stops during the midsection for a somber acoustic lead. “Sacred Dance” ends Aggression on a sinister high note, and a much needed one at that.

The second half of Years Of Aggression is much superior to the first half. The songs are heavier, diverse and the band rips it up while taking risks. The same cannot be said for the first half as it is somewhat contrived and Suicidal dial it in at times. One knows the band is capable of playing high quality thrash and it is frustrating when the guys plays it safe. There is nothing wrong with paying homage to the old school, provided that you do it right. We see this on tracks like “The Roof Of Rats” with its maniacal riffing as the band moves full speed ahead.

Years of Aggression is saved by its second half. Suicidal Angels now has seven records under its belt so folks expect quality. Sure, every band slips up due to wanting to branch out with its music. However, when a band titles its record Years Of Aggression, one expects to hear fast paced, pummeling, take no prisoners thrash metal. This is especially true of a band that formed 18 years ago and has made a mark in the metal world. Now is not the time for the band to rest on its laurels. Metal heads still and will always need music to get out our aggression.