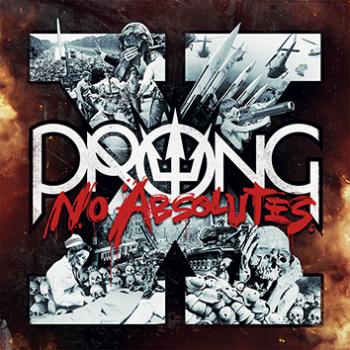 Prong keep the creative ball rolling on X-No Absolutes. The band’s third studio LP in four years, (fourth if you include the group’s 2015 covers album Songs From The Black Hole) X is a heavy, versatile record with the trio performing at its best. The opening track, “Ultimate Authority,” is signature Prong with a tight groove and crunching guitar. There is a strong sense of confidence from the first note. “Sense of Ease” shows the band reaching back to its hardcore/crossover roots. There are several tempo changes and an off the wall solo that only adds to the madness of the track. The no nonsense riffing on “Cut and Dry” is heavy like a concrete slab on glass. Art Cruz’s jackhammer drumming beats the listener into the ground while Tommy unleashes a sinister lead towards the end of the song. There is a slight industrial influence on the title track. The robotic riffs and electronic samples are a nice change from the hardcore thrash of the earlier tracks. The song does not sound out of place at all, as the band keeps the industrial influence to a minimum. Another highlight is the doom meets djent track “Belief System.” The dowtuned dirgey guitars have a minor Meshuggah feel without sounding like a ripoff. Once again, Prong shows its willingness to try new things and blend subgenres to interesting results.

The biggest strength on X-No Absolutes is the band’s confident attitude. Prong takes musical risks on this record and succeed because of the band’s abilities. Then again, Prong has always thought outside the box since its formation in 1986. However, on this record, the band takes influence from doom, industrial, goth and even pop. The album is not soft in the slightest. Fans will have plenty of tunes to headbang too. However, folks unfamiliar with Prong will probably find a few tracks they will like. Production wise, the record sounds just as good as its previous releases on SPV/Steamhammer. There is no clicking or muffled vocals, nor does one instrument drown out the others.

Prong can add another notch to its belt with X. The songs are heavy, the production strong and the band’s attitude is positive. The band continues to improve after 30 years and that commendable unto itself. This record is a must own and that is an absolute.

For more info on the band check out www.prongmusic.com