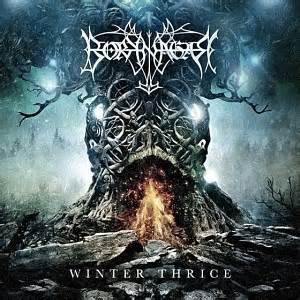 Borknagar continues its progressive push on the band’s tenth record Winter Thrice. The band keeps its black metal roots to a minimum. Instead, there is a greater shift towards folk metal and even power metal. The result is a multi-textured record that draws from diverse influences. The opening track and lead single “The Rhymes of the Mountain” meshes pounding drums with baroque style guitars to stellar effect. Vintersorg’s vocals change throughout the song. First, his voice soars like a hawk over a mountain and then morphs into a hellish shriek. The title track blasts through the speakers in galloping fashion. Again, the vocals are a high point as Garm from Ulver takes the lead on this track. The song contrasts between heavy and serene, making it one of the best tracks on the album. The band is more straight ahead on “Cold Runs The River.” The progressive elements are downplayed in favor of bombastic guitars and blastbeats in the middle of the song. The song is not monotonous at all thanks in no small part to the wah-wah guitar leads and gothic chord progressions. The classically structured “When Chaos Calls” pushes through like whips and twists like a winter storm. The double bass drums and dissonant guitars holds the song together while Vintersorg howls like a wolf atop a hill.

The greatest strength of Winter Thrice is the diversity in the songwriting. There are acoustic guitars, blastbeats guttural vocals, and a slight hint of electronica. Borknagar is unconventional in this respect making the album unpredictable but enjoyable. Fans of European metal will probably appreciate Winter Thrice, with its emphasis on melodicism and its classical influence. The record is heavy, but not like the brutality of American death metal. That does not mean American metalheads will not enjoy this record. However, the acoustic guitars and electronic elements may not appeal to some of them.

Winter Thrice is a solid record from one of Norway’s greatest metal bands. The band’s musicianship is amazing and the production is lushand clear. Borknagar are not the same band it was 20 years ago, but that is a good thing as the band continues to push itself. Fans of Children of Bodom, Amorphis and Insomnium will enjoy Winter Thrice. It is the perfect soundtrack for the Winter season.

For more in for on Borknagar, check out the band’s website http://borknagar.com/