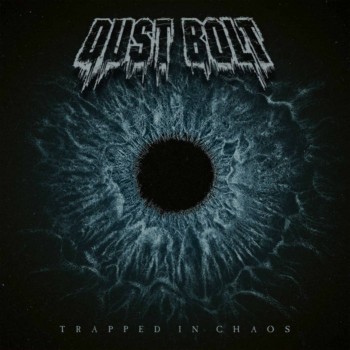 Dust Bolt expands its horizons on the band’s fourth album, Trapped In Chaos. There is greater depth to the songs, while the band retains its signature thrash sound.

Album opener “The Fourth” transitions between aggressive, blistering drums spliced with slower, grooving riffs. Frontman and guitarist Lenny Bruce’s vocals are a bit tepid, however it does not take away from the track.

“Dead Inside” the initial single commences with a crushing, plodding riffs and machine like drums, before speeding up after the first minute of the song. Guitarists Bruce and Flo Dehn play some colossal riffs while drummer Nico Rayman maintains a heavy groove with some impressive double bass.

A warped psychedelic riff opens “Rhythm To The Madness” before the band accelerates in to thrash mode. The track’s midsection slams like a caged animal before the tempo speeds up at the song’s conclusion. The tracks “Shed My Skin” and “Killing Time” are straight up thrash numbers with a pinch of hardcore that get the head banding. The latter has a couple of ripping guitar leads that reaffirm this band are not a one trick pony.

“Another Day In Hell” is the third single off Trapped and has a dark atmosphere punctuated with haunting clean guitars and a slow beat. This is certain to become a fan favorite and shows the band’s growth as songwriters. Album closer “Who I Am” ends things on an aggressive note with a sped up galloping riff that transitions to a slower bottom heavy groove that fades in to noise.

Trapped In Chaos is Dust Bolt’s experimental record, which will draw detractors because the band plays softer, slower tracks. There are some thrashing tracks on here, but the slower, acoustic parts provide depth the songs and a contrast to the faster songs. This is expected as the band does not want to release the same record over and again. However, there is the concern that Dust Bolt would all but abandon its thrash roots in favor of short, mainstream songs. Fortunately the band does not do that here. The vocals are a bit shaky and at times the band seems a little reluctant to move too far. However, this record may be the turning point for Dust Bolt as it melds its sound in to something more cohesive. Slayer did it with Seasons In The Abyss as it combined the best elements of South Of Heaven and Reign in Blood. It seems Dust Bolt wants to do the same thing.

Trapped In Chaos is a nice dose of thrash metal to ring in 2019. It is a mix of old and new that should satisfy most of the band’s fans. This is not the band’s Turbo album, but some fans may be let down by the softer tracks on the album. Still, bands progress and Dust Bolt want to add more panache to its music. This is good, or else the band would be trapped.

Check out the Dust Bolt’s official website for more information.