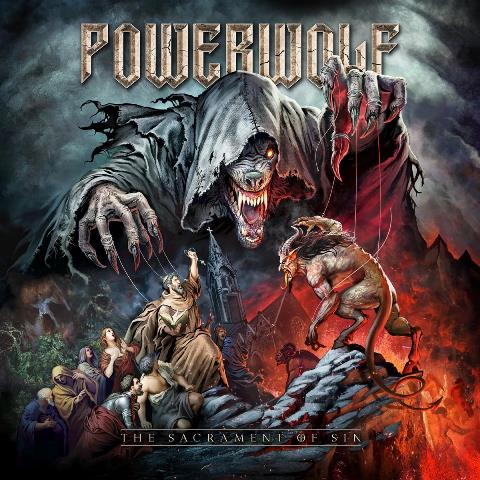 CD Review: “The Sacrament Of Sin” by Powerwolf

German gothic power metal quintet Powerwolf offers its seventh release titled The Sacrament Of Sin. The album is a dark, yet accessible as it blends gothic, power metal and symphonic metal to strong effect. Album opener “Fire & Forgive” is a galloping number with a bombastic chorus and shredding guitar lead. “Demons Are A Girl’s Best Friend” is a straight forward rocker that will appease gothic girls the world over. The saccharine nature of the song borders on comedy, but does not take away from the album. Things take a dour turn on “Killers With The Cross” which sounds inspired by 1960s Hammer vampire films. The stomping drums are instep with the dynamic riffs by guitarists Matthew and Charles Greywolf. This is not a generic track as there are several interweaving leads during the song’s midsection. “Where The Wild Wolves Have Gone” is a sorrowful ballad with lush piano and powerful vocals by front man Atilla Dorn. The Greywolf Brothers again offer stellar guitar leads that underline the track’s melancholy tone. “Nightside of Siberia” fierce riffing recalls viking metal stalwarts Amon Amarth. However, this is not a blatant ripoff, but a slight homage. The baroque guitar work and pounding bass drums make this one of the standout tracks on Sacrament.

The Sacrament of Sin is an accessible metal record with an extreme edge. Powerwolf adopts the epic bombast of power metal sans the pretentiousness of the aforementioned genre. No song on this album even approaches the 5 minute mark nor are there elongated guitar leads or drum solos. The musicianship is strong and the record is rife with shout-along choruses. Producer Jens Bogren does a great job of capturing the Greywolf Brother’s guitar chops and Dorn’s vocals.

In numerology, the number seven means completion. Well, here is hoping Powerwolf do not hang it up anytime soon. The Sacrament Of Sin is a strong record that should satisfy fans of power and symphonic metal. This sacrament ensues headbanging.

For news and tour info, check out the band’s website at www.powerwolf.net