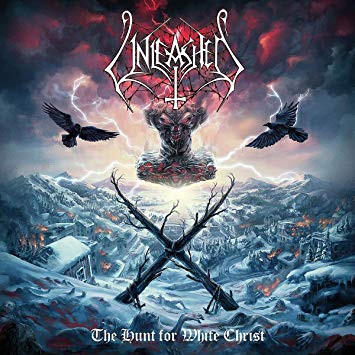 CD Review: “The Hunt For White Christ” by Unleashed

Unleashed celebrate its 30th anniversary next year and it is fitting that the Swedish death metal masters release a new record. The Hunt For White Christ is album number thirteen, and is rife with the viking imagery, thrashing riffs and pounding drums the band is known for.

“Lead Us Into War” engulfs the listener in a blizzard of piercing riffs which form a hammer that swings down during the chorus. It is a superb track to open White Christ.Unfortunately the following track “You Will Fall” stifles the album’s momentum. It is not a bad track, but sounds subdued compared to the opening track.

“Stand Your Ground” picks things up with its mid paced main riff and stomping chorus. Vocalist and bassist Johnny Hedlund’s guttural vocals are decipherable and there is an added urgency in his voice as he urges listeners to make a stand and fight. Guitarists Fredrik Folkare and Tomas Olsson lay down some bluesy leads with a classical flair.

The album really picks up on “Terror Christ” with its grinding guitar riffs that sound like a tank descending upon a city in ruins. The guitar leads are again incredible and complement the dark vibe on this track. “They Rape The Land” continues the auditory assault with a galloping thrash riff that causes instant whiplash. This track has several rhythm changes that capture the chaos of battle but it all flows well.

“The City Of Jorsala Shall Fall” is notable for its Middle Eastern inspired chorus riff, which complements the song title as Jorsala is Swedish for Jerusalem. It is another mid paced stomper with sharp riffs that cut at every turn. The title track is a short blast of pummeling drums and bludgeoning guitars that are lockstep with one another. It is the shortest track on the record and the most straightforward.

“Open To All The World” is a blistering track with a smidgen of hardcore for good measure. It rarely relents and concludes the album with a dissonant acoustic guitar.

The Hunt For White Christ shows how impressive Unleashed sounds when it is focused. The album’s second half is almost perfect, as the songs flow well and take the listener on an exciting and bloody journey. That does not mean the first half of White Christ is bad. However, a couple of tracks are rather disjointed and slightly weak compared to the second half. The production is great with special notice to the guitar tones, particularly the solos. The leads are clear and at times possess a supernal feel. The rhythm changes on these tracks are seamless and heighten the overall excitement of the album.

The Hunt For White Christ is the band’s thirteenth album, but it is certainly not unlucky. Unleashed fire on all cylinders for most of the record proving once again its status as a legendary death metal band. Fans will enjoy this record as the few weaker tracks are eclipsed by the entire record. Unleashed should continue the hunt when it results in killer albums like this.

Check out the band’s official website for news and tour dates: