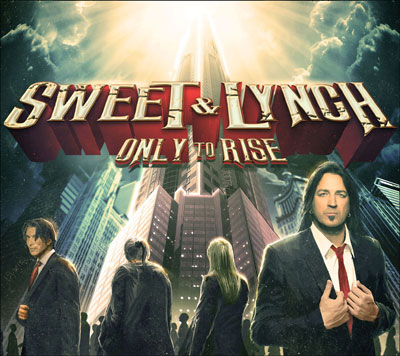 CD Review: ‘Only to Rise’ by Sweet & Lynch

Few sounds can capture the feel of the late 80s and early 90s like the clean guitar licks that scream from George Lynch’s (Dokken, Lynch Mob) fingers and out through his amp. Combine that with Michael Sweet’s (Stryper) powerful trumpeting vocals and you have the recipe for a hard rock album the likes of which we haven’t heard in years.

Sweet & Lynch is comprised of Michael Sweet on vocals, George Lynch on lead guitars, James Lomenzo (Megadeth, White Lion) on bass and Brian Tichy (Whitesnake) on drums. The super-band was formed when the president of Frontiers Music, Serafino Perugino, asked to approach Sweet about singing on a record. Sweet and Lynch began producing the project and co-writing the songs, eventually enlisting Lomenzo and Tichy to complete the band.

With the release of Only to Rise on Jan. 27, the silent halls of guitar rock are finally beginning to resonate again. The first song on Only to Rise, “The Wish,” starts with a guitar punch to the face and begins marching the listener proudly through music designed to make you play air guitar, bob your head and throw up the sign of the horns.

While the creation of such a super-group may cause some to raise an eyebrow, the end result of their genesis is enjoyable and powerful. As a whole, Only to Rise is well produced, enthusiastic and genuine. Each song on the first half of Rise to Me builds on the previous one, eventually reaching a high point with the fifth track, the rock anthem “Rescue Me.” Sweet & Lynch then pauses for a breath and brings us the one rock-ballad on the album,”Me Without You.”

The brief respite for the Bic-lighter-waving slow jam is soon forgotten as the album rolls to the finish with a non-stop feast of fast beats, guitar solos and Sweet’s powerful vocals. The final (and title) song of the album, “Only to Rise” begins with a sound and rhythm reminiscent of Mötley Crüe’s “Kickstart My Heart” and leaves us only wanting more.

Only to Rise manages to transport the willing listener back to the days when the pants were leather, the pyrotechnics were big and the hair was even bigger. If you loved the bands of that era and long for the time before Nirvana and the grunge movement stole their thunder, then do yourself a favor and check out Only to Rise. While the guitar rock bands of the 80s are enjoying a renaissance, very few of them are recording any new material of note, opting instead to play their greatest hits in front of their adoring fans. If the idea of hearing new music from hard rock masters appeals to you, then be sure to check out Sweet & Lynch. You will not be disappointed.