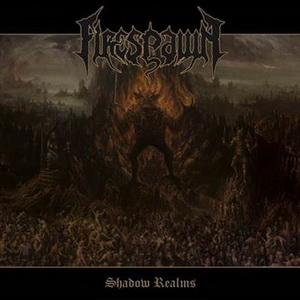 There is nothing like a Swedish death metal supergroup to shake things up. Firespawn is comprised of vocalist L.G. Petrov (Entombed A.D.), guitarist Victor Brandt (Entombed A.D.), bassist Alex Impaler (Necrophobic), guitarist Fredrik Folkare (Unleashed, Necrophobic) and drummer Matte Modin (Raised Fist, ex-Dark Funeral). Firespawn’s debut, Shadow Realms, takes elements from the aforementioned bands and the results are solid. The record’s sound is hard to pin down because the band draws from numerous influences. “The Emperor” melds blast beats with a churning groove below Petrov’s infamous guttural vocals. There is a carefree attitude to the song, in the sense that the band does not constrict itself. This attitude carries throughout the album. The debut single “Lucifer Has Spoken” is dark and sinister with its dissonant melody and pounding drums. “Spirit of the Black Tide” rips like a tornado through a sleepy village. The twisting guitar riffs and galloping drums are relentless from beginning to end. The anthemic “All Hail” walks the thin line between seriousness and silliness. That humorous ambiguity abruptly ends on “Ruination” which is a thrasher. The band even goes djent on “Necromance” further solidifying its refusal to follow the rules. There is no genre in extreme metal this band will not touch.

The band’s carefree and open-minded attitude makes Shadow Realms work. There is no influence that overshadows (couldn’t help it) the other. Some of the songs are technical, brutal knockouts. While other songs are more restrained and simplied. Thus, Firespawn bucks the trend is playing within the parameters of a particular sub-genre. Petrov’s vocal style is guttural but decipherable, which is another strength to the album. Today’s death metal scene is oversaturated with vocalists that would rather grunt and screech as opposed to sing. The music on Shadow Realms is more disturbing and genuine because you can hear from Petrov is saying.

Overall, Shadow Realms is a great debut record. The guys went in with no hang-ups and cranked out a solid metal album. If you enjoy extreme metal, this record is for you.

For news on Firespawn, check out the band’s Facebook page: https://www.facebook.com/firespawnofficial/