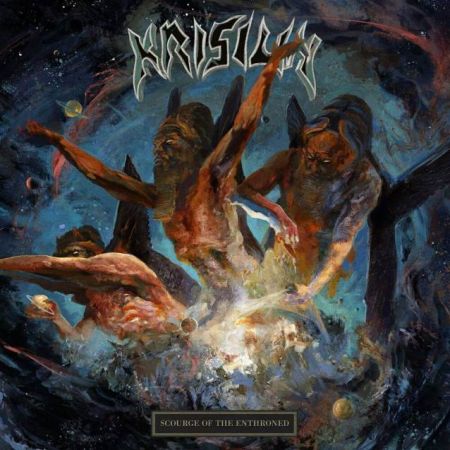 CD Review: “Scourge Of The Enthroned” by Krisiun

Krisiun’s eleventh record, Scourge Of The Enthroned, is a colossal slab of merciless blast beats and armor crushing riffs. The title track opens this album with a hellish, yet grandiose riff before slamming straight to hell. Drummer Max Kolesne’s chaotic blast beats synchronize with Moyses Kolesne’s chainsaw guitars throughout the song. The song’s seamless rhythm changes make for an unpredictable and exciting listen.

“Demonic III” is possibly a tribute to this brotherly trio, whose music could conjure a thousand devils. The pulverizing stop start riff sets the mood of this track before the band plays even faster! Moyses even treats us to several guitar leads sandwiched between the monolithic drums and riffs. Meanwhile, bassist and vocalist Alex Camargo’s guttural vocals match the song’s intensity. The song’s crushing midsection solidifies this song as one of the best in the band’s 28 year existence.

Max’s drumming on “Slay The Prophet” advances like an army upon a defenseless city. Once again the track’s midsection provides the listener a slight break as the band settles into brief, albeit nice groove before switching back to heavy mode. Krisiun’s thrash influence shows on “A Thousand Graves” with its fast tempo before transitioning to a rolling blast beat pattern. The riffs on this track strike like several spikes at once. Album closer “Whirlwind Of Immortality” commences with a twisting riff that is joined by rapid drumming, before alternating between a broken galloping riff and a staccato riffing bolstered by blast beats. A fitting end for a record structured on uncertainty and technical chaos.

Scourge Of The Enthroned is Krisiun at its most technical, yet its most dynamic. The complex song structures are at times catchy but never ambitious. Technical death metal bands often fall victim to emphasizing musicianship over emotion, yet Krisiun avoids this common pitfall. You can chalk it up to experience, however Scourge’s brevity is also a main factor. It features just eight tracks and is barely 38 minutes in length. Therefore, Krisiun spend little time fooling about and get right to business. The album’s production superb which is expected from this trio. The drumming and guitars are up front and one can easily hear every time change, riff and lead.

Krisiun once again prove why it is extreme metal royalty on this record. Scourge Of The Enthroned shows a band operating at top performance with several tracks that will certainly become fan favorites. Fans should not worry about the album’s length compared to the band’s past three releases as the songs are around four to six minutes in length. This record certainly takes the throne.