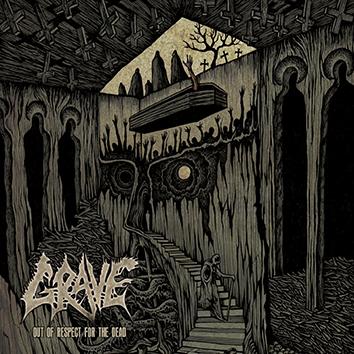 CD Review: ‘Out Of Respect For The Dead’ By Grave

Swedish death metal band Grave return from the dead with its 11th record. Out Of Respect For The Dead is pure Stockholm death metal, complete with gory lyrics, buzzsaw guitars and manic drumming. The opener “Mass Grave Mass” is a brutal headbanger that does not relent until the final note. “Flesh Before My Eyes” is another thrasher with a macabre breakdown in the middle of the track. The droning, squealing guitars bring things to an unsettling standstill before speeding up again at the end. The Sabbath inspired “Plain Pine Box” is a nice slab of doom metal that is every bit as heavy as the records faster songs. The title track is a suffocating thrasher with an endless spew of riffs and guttural vocals. It is straight ahead, no frills death metal that rips the jugular. The colossal “Grotesque Gory” trudges like a zombie through the graveyard. A fitting end for a record titled as an homage to the dead.

This record’s greatest strength is the balance of simplicity with technicality. Grave is dynamic, but have the musical chops to switch things up when necessary. The record is filled with rhythm changes and complex tempos, but also straight forward metal. This is good as the record is neither monotonous or pretentious. A common problem with new death metal bands are that they place musicianship over songwriting. Thus, the songs are a batch of complicated musical ideas, but fail to translate into songs. Grave never falls into this trap, as the songs sound like songs. Then again, the band has existed for nearly 30 years so it has experience on its side.

Out Of Respect For The Dead is old school death metal done right. Grave once again prove why its one of the most revered and influential bands in extreme music. Grave fans will be pleased as well as extreme metal fans in general. Go out and by the record. The dead will be honored when you do.

Check out the band’s Facebook page for news and tour dates: https://www.facebook.com/GraveOfficial