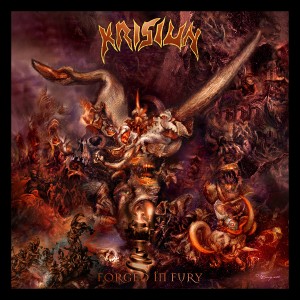 Four years have passed since Krisiun’s last album, The Great Execution. The gap has not slowed the death metal outfit at all. Krisiun is all business on album opener “Scars of the Hatred.” The unorthodox song structure, mechanical riffing and relentless drumming is signature Krisiun. The track maintains a mid-tempo beat, with chaotic blast beats in the mid-section. “The Ways of Barbarism” is as savage as the title describes it. The hypnotic bass and guitar lines fit over the manic drumming before converging in to a nice groove and then breaking out in to an auditory assault. At 6 1/2 minutes, “The Ways of Barbarism” is the longest track on Forged in Fury, and avoids monotony. Things speed up on the blistering “Dogma of Submission.” The song is merciless and is reminiscent of Krisiun’s excellent 2008 release, The Southern Storm. The track seamlessly transitions from blast beats to groove without hesitation. Vocalist Alex Camaro’s bass playing also takes center stage as he plucks like a man possessed. “Strength Forged Fury” follows in the same vein with a monolithic drum build up before an eruption of molten riffs. The fiery guitar leads only accentuate the violent nature of this track. Things slow down on “The Soulless Impaler” with its mystical, clean intro and tribal drumming. The track has a minor Nile influence, which is interesting, however the band does not imitate its South Carolina peers. The song is straight Krisiun with its restrained composition before going full throttle towards the middle of the track.

Erik Rutan (Hate Eternal) produced Forged in Fury and did a solid job capturing the group’s compressed chaos on tape. Max Kolesne’s drums are the highlight on Forged as every cymbal crash and blast beat is clear. The album is also commendable for the audible bass, which so often is drowned out by guitars on death metal albums. The production is thick, but never distorts or hinders the musicianship of the songs.

Forged in Fury was worth the wait. It would have been nice to hear this record 2 years ago, but late is better than never. Krisiun fans will like Forged, as will death metal fans in general. Some may criticize the record for its length, which clocks in at 51 minutes. However, the songs are varied and the record does not sound repetitious. Forged in Fury is unbreakable, unyielding, and unstoppable.

For news and tour dates, check out www.krisiun.com.br.