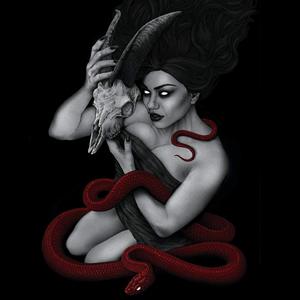 Ringworm’s eighth release, Death Becomes My Voice, continues the band’s vicious hardcore metal assault over the past three decades. The title track is a pugnacious combination of hardcore drumming and thrashing guitar riffs that grip your jugular for five minutes. HF’s harsh, maniacal vocals stand out on this track. “Carnivores” is another fast number with some brief blast beats thrown in for good measure. The song speeds up towards the final minute before guitarists Matt Sorg and Mark Witherspoon pull out a grooving riff while the track fades. The dissonant riffs and brutal drumming sounds like The Haunted meshed with Napalm Death. “Acquiesce” is an uncomfortable slower track thanks to the apocalyptic main riff and HF’s guttural vocals. The scooping riff on “Do Not Resuscitate” is reminiscent of a hook slicing in to human flesh. Drummer Ryan Steigerwald delivers the punishment on this track as it is pure Slayer worship from beginning to end. “The God Of New Flesh” is the shortest track on Voice, a chaotic assemblage of thrash, punk and grindcore. The band never falters through the constant tempo changes, keeping the listener on their toes until the song concludes. Album closer “Final Division” is a pummeling requiem that ends with a doom riff and sorrowful guitar solo.

Bands playing across extreme musical genres has occurred for roughly 35 years. Metalcore and deathcore have enjoyed varying degrees of popularity in the U.S. for roughly 15 years. Quality is the key issue, and while many bands attempt to meld genres, few succeed. Ringworm are one of those few bands and Death Becomes My Voice solidifies its status in the metal underground. The tracks on this album hit like a bat to the spine and a rusty blade to the lung. The brevity of the tracks and slight diversity makes Voice an interesting listen. There is little monotony due to stellar drumming and above average guitar work.

Fans of Ringworm should purchase Death Becomes My Voice. It is a fun, thrashing record that induces headbanging from the first track. Fans of crossover and thrash will enjoy the band’s speed and demonic guitar harmonies. Thrash ’til death.