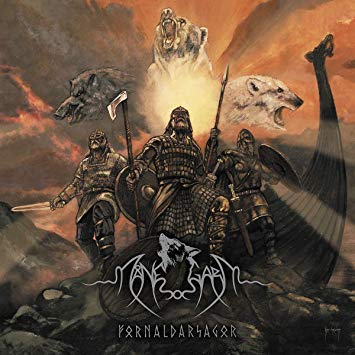 Swedish metal trio Manegarm’s ninth release, Fornaldarsagor, is a meld of melodic folk metal and black metal. The opening track “Sveablotet,” commences with dissonant black metal riffing and several rhythm chances before slowing down during the palatial chorus. Guitarist Markus Ande steals the show with his ability to meld hellish tremolo picking with grandiose riffs. “Hervors arv” continues the fast paced tempo of the previous track. Bassist and vocalist Erik Grawsio’s harsh vocals sound like those of a viking fighting on a snowy battlefield. Manegarm’s folk influence is more prominent on this track, especially during the midsection. “Slaget vid Bravalla” is a ferocious track with drummer Jakob Hallegren’s unceasing double drums intermixed with slicing blast beats. The crushing chorus riff is underscored with gargantuan double drums. “Ett sista farva” is an anthemic folk metal ballad with tranquil guitars and soothing female vocals. The chorus is memorable and evokes images of vikings seated around a campfire singing of their victories. “Dodskvadet” is a serene folk song composed with stringed instruments and acoustic guitars. A fitting end to a heavy album.

Fornaldarsagor features eight tracks each with an average length of five minutes. However, the songs do not drag on as the tracks are both catchy and maintain a degree of complexity. The folks elements are not cheesy or insincere, which is evident on “Dodskvadet.” The folk instruments and Swedish lyrics grant a greater degree of authenticity on this record.

Manegarm did its ancestors proud with Fornaldarsagor. Fans of Amon Amarth, Amorphis and Heidevolk will enjoy this record with its heavy, yet catchy songs and folk elements. Long live the Viking Age.