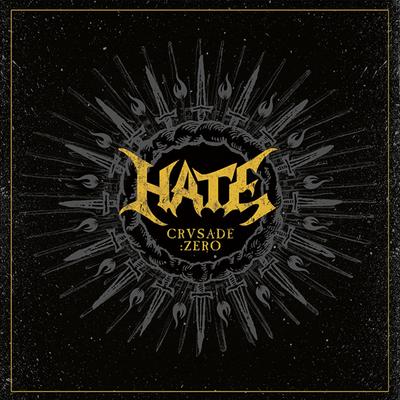 The moment I heard the opening track on this record, I knew I was in for a blasphemous treat. “Vox Dei (A Call From Beyond)” blends industrial and classical music to create an ominous, foreboding atmosphere. “Death Liberator” is the first proper track on the album and swings back and forth with dissonant riffs and pummeling drums. The band opts for melody and mood over brutality, thus evoking a feeling of unease. Drummer Pavulon really shows off his skills on this track, as he keeps the intensity level high for six minutes. On the track “Leviathan,” there is an obvious Behemoth influence. This is no surprise as both bands hail from Poland and formed at roughly the same time. However, Hate does not imitate its much heralded contemporaries and keeps the influence to a minimum. “Leviathan” rips like a demon through flesh and suffocates the listener in its ugly glory. The majestic tribalism of “Hate is the Law” is no frills black metal complete with superb blast beats and serpentine guitars. The breakdown in the middle is sure to get the pit moving at a live show. The grotesque title track stands out with its rolling drums and sumptuous riffs.

Crusade:Zero was recorded at Polish Hertz Studios. Vader and Behemoth have also recorded at this studio, which explains the sound on this album. Again, Crusade:Zero is not a rip off or copycat of the aforementioned bands. However, there is a familiar tone on this record. It is actually good in a sense as Poland has a signature sound distinguishable from Floridian Death Metal or Gothenburg Death Metal. The band keeps things interesting, but does not go too far outside the box. Whereas Behemoth pulled no punches on its masterpiece The Satanist in 2014, Hate is content to adhere to death metal conventions, while throwing out a few surprises. This is good as the band tries new things without abandoning its sound.

Crusade:Zero is no Satanist, but it is not supposed to be. It is another strong release by Hate that is primed to be a sleeper hit. The record is rife with songs just ready to be unleashed on an unsuspecting audience. This is another victorious crusade. Hate’s Crusade:Zero is set to hit the shelves on Jan. 25 in Europe, and on Feb. 10 in the US and Canada.