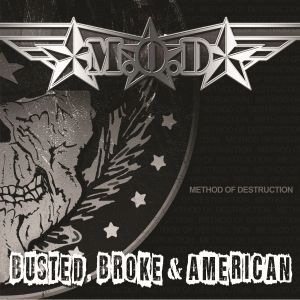 Method of Destruction unleash a nail bomb of hardcore rage on Busted, Broke & American. “The Final Declaration” is two minutes of vitriolic American bravado over pulverizing drums and thrashing guitars. Frontman Billy Milano has not slowed down a bit, possessing the same energy he displayed in 1985 on Stormtroopers of Death’s classic record Speak English Or Die. The obnoxious “You’re a F*cking D*ick” is a blend of punk riffs and bluesy guitar leads. It is vintage thrashcore with a modern twist. “Fight” is a frenetic number that stops and starts before settling in to a grooving midsection. The following track “Hooligan” is a blasting piece of hardcore with chorus shouts and Milano hoarsely calling out anyone brave (or foolish) enough to fight him. The short breakdown allows the listener to catch their breath before things speed up again. Of course, the album is not complete without an homage to Milano himself. “Billy Be Damned” is the little brother to “Milano Mosh.” It lacks the relentless brutality of the former, but at 53 Billy is still that angry, offensive unpredictable pitbull the metal community loves, or loves to hate. We are treated to a short instrumental with “All Out of Bubblegum” which has a fairly decent shredding guitar lead. However, things get confrontational on “Go Go Revolution” which has a nice contrast with its catchy chorus and barrage of rapid riffs. It is one of the best tracks on the record and hopefully the guys will play it live.

Busted, Broke & American is hardcore metal done right. The grizzled veterans seamlessly meld punk, thrash and traditional metal with no problems. It is no frills metal that gets the job done and moves on to the next track. However, M.O.D are not going through the motions. There is a youthful exuberance to this album and it is obvious the band had fun in the studio. The album has a political overtone as it opens with a speech by President Eisenhower and concludes with a speech by President Kennedy. People familiar with Milano’s previous work knows his political beliefs. He does not hold back and will certainly offend some people. However, provocation is certainly what metal is all about.

The band’s first album in ten years is worth the wait. M.O.D still play offensive crossover thrash like no other with ten mosh inducing tracks on here. Folks offended by Milano’s right-wing politics should probably avoid this album. However, fans and those not easily offended should enjoy it. The insults are a bit forced at times, but that does not lessen the album as a whole. Busted, Broke & American is the hardcore record to play this Independence Day week.