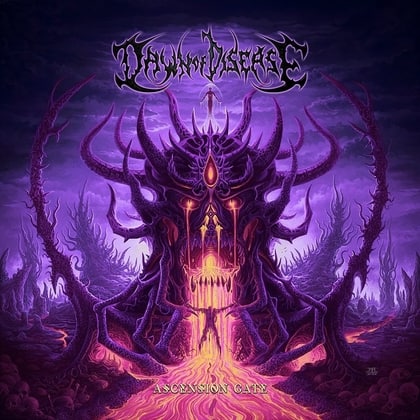 German death metal quintet Dawn of Disease unleash its fourth album Ascension Gate only a year after its predecessor, Worship The Grave. Ascension is an amalgam of melodicism, brutal blast beats and melancholic doom riffs. The Swedish metal influence is apparent on “Perimortal” the album’s initial single. The sharp, baroque guitar riffs chop through the speakers like sabers while drummer Matthias Blasse pummels his kit with few moments to rest. “Leprous Thoughts” is a relentless thrasher with grinding riffs and pulverizing blast beats. The harmonious guitar solo contrasts perfectly with the brutal drumming and riffs on this track. “Ascension Gate” recalls Tales From A Thousand Lakes era Amorphis with its death meets doom metal sound. Tomasz Wisniewski’s guttural vocals match the haunting mood on this track, painting a picture of a gloomy night in the German countryside. A highlight is the eerie guitar line played before the track’s middle section. “Akephalos” is another crushing song that with buzzsaw guitars that could cut through a tank. The bombastic drumming only heightens the chaotic nature on this track.

Ascension Gate is an album pieced from several sub-genres. One cannot lump this record into the melodic death metal bin as there is too much going on during the album’s 50 minute duration. It is equal parts haute, classical bombast while also gloomy and downcast. Still, the band melds everything quite well and the record is not disjointed. The production is slightly muddled which detracts from the musicianship in some spots. However, it sounds superb when the band plays slow, heavy riffs. The percussion is loud and clear allowing the listener to hear all the rhythm changes and drum fills.

Dawn of Disease show its Scandinavian peers that German death metal is no joke on Ascension Gate. This record is both technical and pugnacious without overstaying its welcome. Fans of melodic death metal and even brutal death should enjoy this release. It does not have the finesse of Arch Enemy or Children of Bodom but it is certainly crushing. Dawn of Disease is poised to ascend to the heights of the metal realm with this record.

For news and tour dates, check out the band’s official Facebook page: