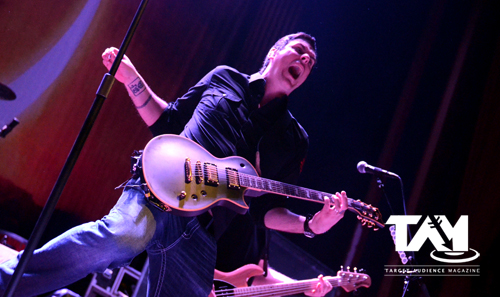 Breaking Benjamin returned to Atlanta April 22, playing to a sold out crowd at The Tabernacle. The band recently reformed after a five-year hiatus with a new line-up and announcement of new album Dark Before Dawn, which is set to drop June 23. Lead single “Failure” rocketed to the top of the iTunes rock charts just minutes after its release and has continued to dominate rock radio ever since.

But it was the old school tunes that Breaking Benjamin’s fans were yearning for at the Tabernacle, and the band delivered with an epic 22-song set that spanned their four album career and then some. “So Cold,” the hit single from second album We Are Not Alone, had fans screaming along and fist pumping from the start. That energy continued with “Follow,” “Break My Fall,” “Unknown Soldier,” and “Sooner or Later.” The crowd roared for “Blow Me Away” from the Halo 2 Soundtrack and front man Benjamin Burnley was loving it, jutting his microphone into the crowd to let them sing for him. Burnley continuously thanked the fans for their support throughout the night and it was obvious he’s missed being out on the road playing shows. During the song “Phase,” a couple of people in the crowd started fighting and Burnley actually stopped the song to break it up, telling them to be respectful of each other and just enjoy the music. Later, Burnley personally handed out several bottles of water to the people in the pit, and then got back to the music with “Breakdown” and a throwback to first album Saturate, “Shallow Bay.”

The most epic performance of the night, however, was an unexpected cover of Metallica’s “Through the Never,” which showcased Burnley’s impressive range and brought out the true metal heads in the crowd, with several people head banging along. The covers continued with a medley that included Tool’s “Sober,” Nirvana’s “Smells Like Teen Spirit,” and Pantera’s “Walk,” before the band got back to their own hits with “Evil Angel,” and “I Will Not Bow.”
The crowd demanded an encore and the band delivered with “Dance With The Devil,” “Lights Out” and the band’s biggest hit “The Diary of Jane.”

Full set list:
So Cold
Follow
Break My Fall
Unknown Soldier
Sooner or Later
Blow Me Away
Failure
Breath
Phase
Breakdown
Away
Shallow Bay
Give Me a Sign
Through the Never (Metallica cover)
Polyamorous
Covers medley (Sober/Smells Like Teen Spirit/Walk)
Evil Angel
Until the End
I Will Not Bow
Encore:
Dance with the Devil
Lights Out
The Diary of Jane